I watched Twin Peaks when it was on TV many years ago.

Wow, it was 1990. It blew my mind and I managed to get every episode taped except # 3 the dream sequence (you know the one, reverse talking, little person, all red with Laura’s cousin) episode.

I watched it, but the VCR (yeah, VCR) malfunctioned and taped the wrong channel and ruined a perfect run. No idea what happened to those tapes that I cherished so much.

I saw the movie when it came out, I read the book that was Laura Palmer’s Diary… I had it bad for Twin Peaks.

Recently Cindy and I started watching them since she never had. It has held up pretty well, though we are now at the Laura Palmer’s murder is solved and the story is fractionating and starting to remind me of Fonzie jumping the shark episode, if you know what I mean. Gotta carry on and finish now though, only about 6 episodes to go.

This go around a few things have stuck me.

1) It is impossible for me to look at Kyle McLachlan without seeing “The Captain” from “How I Met Your Mother”. 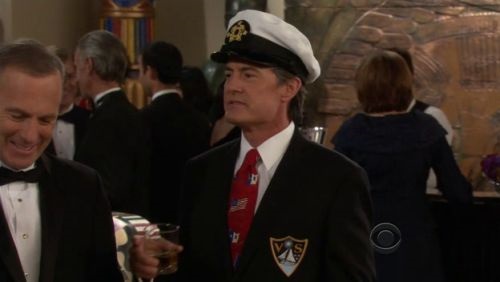 2) I totally forgot David Duchovny was in it as a cross dressing FBI agent.

3) The music is so freaking weird.
Angelo Badalamenti does the music and it is almost impossible to separate the music from the show. They go together so well, I have to believe that it wouldn’t work with anything else. He has taken the art of finger snapping to a whole other level. It’s jazzy, moody, creepy and like 50’s doo-wop bass on the wrong speed. So strange.

Angelo has done many other soundtracks, including a bunch for David Lynch’s other films.

I can honestly say that David Lynch affected me. Not to get too far off course but the film “Blue Velvet” broke me for quite some time. “Wild Hearts” was much the same. I vividly recall going to Dalton’s place to watch “Lost Highway” one night. We were stoked because Nine Inch Nails had music in it. That was the best part of a traumatizing movie experience. It gave me a headache and I actually felt mentally assaulted afterwards. “Mulholland Drive” was equally weird and “Inland Empire” was the end of the line for me. After that confusion-fest I swore off Lynch inspired films for many years.

So coming full circle to the softer side of Lynch with Twin Peaks was a nice change. I can appreciate his bizarre camera angles, random scenes, slow motion and reverse motion shots, all the things he does, but with softer edges than his films.

I may have to seek out the Twin Peaks Theme for the permanent collection. It’s not one you would put on random with your other I-Pod songs, but for the right moment…