We stopped in for a bite at Lucky’s (http://www.luckysbarandgrille.com/waunakee/) in Waunakee the other night. It is a restaurant bar with a decidedly Waunakee themed decorations. Waunakee jerseys and sports photos (plenty by Julie Fix, who incidentally did Max’s Senior pictures http://www.jfixfotoworx.com/) and sports memorabilia is everywhere. They have pool tables, some video games and plenty of TV’s and an outdoor area too. The food is great too.

And guess what? They have live music.

This is what greeted us on the way in, in the entryway. 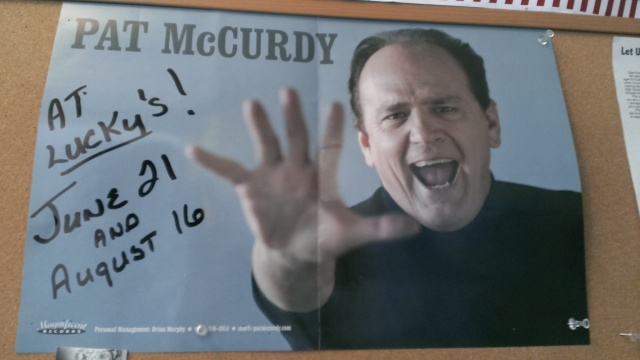 Cindy (a Pat-head) has seen Pat several times in the past and I’ve always wanted to. Right here in Waunakee?! No way!

Then I turned to open the inner door and saw this.

Brandon Beebe! and Robert J too.

I’ve seen Brandon once and always wanted to see him again, and Robert J. is known to me via his vinyl album that I purchased long ago from Half Price Books. I picked it up since I noticed it was signed. Then I noticed it was a local record, recorded at Smart Studios in Madison. Produced by Butch Vig and John Conaway. Had to get it.

So that’s 3 people I would like to see in a month.

During dinner we kicked it around a bit. Turns out we will likely be camping during the Brandon Beebe show. There is a tentative plan for the weekend of Robert J too. However, we are free on the Pat McCurdy show night! As it so happened the General Manager noticed me taking a picture of the poster and came by and asked us if we liked Pat. Cindy confessed to being a Pat-head. That’s when it happened. The GM mentioned that there were V.I.P. seats for the show for $50. Cindy’s eyes lit up for a moment.

We had a good dinner, sent a message to some friends about the show seeing if they were interested in going and went home.

A few nights later, with our friends a go, I went back to Lucky’s and bought the V.I.P. table ticket. It wasn’t the stub I was expecting, but it will work.

It is written on the back of the General Manager’s business card. Now that’s lo-fi.

This gets a table next to the stage.

Right up close for Pat McCurdy.