Abbey went to see Jamie T in Chicago a few weeks back and I told her to write a guest blog. She sent me this to post. Nice job Abbey.

After 7 years, 2 hours of driving, and a $25 concert ticket, Katie, Ryan and I arrived at Lincoln Hall, in Chicago, I was finally going to see Jamie T!

Out of the six American gigs, this was the closest to us, I HAD to go! And luckily, I have awesome friends who went with me. We accidentally arrived about two hours early, so we had a few drinks, and explored the venue. Lincoln Hall was a great venue, with a small restaurant/bar at the front, a small stage area (with another bar), and a cool balcony (with yet another bar). We chose some seats on the balcony for the two opening acts, Cold Specks and Flesh Panthers.

The first opener, Flesh Panthers, reminded me of some British rock band from the 50’s… and the second, Cold Specks (who were apparently supposed to play another night, but got pushed back because of snow), were considerably more chill… more slow and poetic. Then, it was time to move down to the floor.

As they set up, someone taped down the setlist 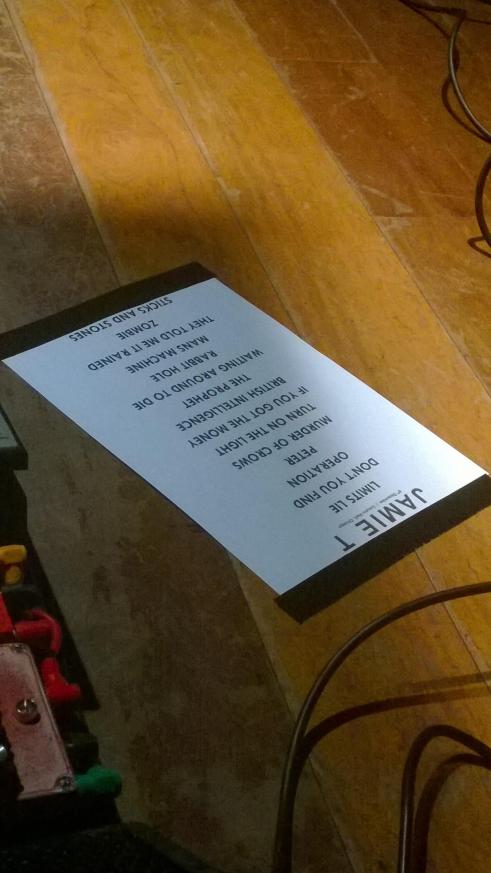 (which I failed to steal after the show, someone else go to it first, dang!)… I took a peek and got excited to see most of the new album, but some old stuff as well.

In high school, my friend Stacey introduced me to Jamie T… we would drive around blasting “Panic Prevention” memorizing the words and belting them out. I’m pretty sure we both still know all the words to all those songs… We were so cool. His sound was what I like to describe to people as “BLAGH, LONDON”… I’m not as good as my dad at this! A bit punk, a bit rap, singing about drinking, hanging out with mates, girls, and panic attacks. I loved it.

(Side note – sorry for listening to this album TOO MUCH DAD – forget Panic Prevention, and give the new album a try)

In college, his second album, Kings & Queens came out, which I didn’t care for as much as the first, although there was a song with the lyrics: “I met Gods and monsters, women from Wisconsin”, which was clearly written about Stacey and I.

Little did we know that we wouldn’t hear from Jamie T again for 6 more years! Last we heard, he got laryngitis, and cancelled a bunch of shows, and presumably disappeared off the face of the earth… until last summer. Jamie posted a handwritten note saying that he was going to be doing a few shows! 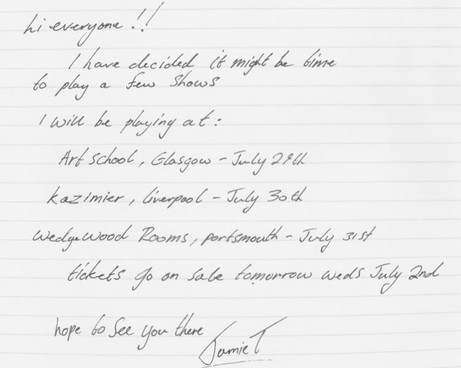 After this mini-tour, Jamie did an interview with Zane Lowe on BBC Radio 1, which I listen to religiously http://www.bbc.co.uk/programmes/p024nbqh you can listen here), and I immediately signed up for his mailing list, and keep my eye out for dates.

The first single out was “Don’t You Find” – which was a lot more… mature? It was a new sound, but I liked it.

Then was “Zombie” – a more upbeat, fun song, apparently “an homage to his beloved Clash – he’s a self-declared mess”

So far so good, I was just glad to hear new Jamie T! I kept checking the website until finally I saw his six American dates, bought my ticket, and was there!

Jamie came on stage to a HUGE amount of applause. Although it wasn’t a large venue, it was clearly full of fans. We managed to squeeze our way almost to the front, with just a few guys and a speaker between Jamie and I (I got this pic between their heads). He said he was wearing sunglasses because he was scared shitless of us, and the lights 🙂 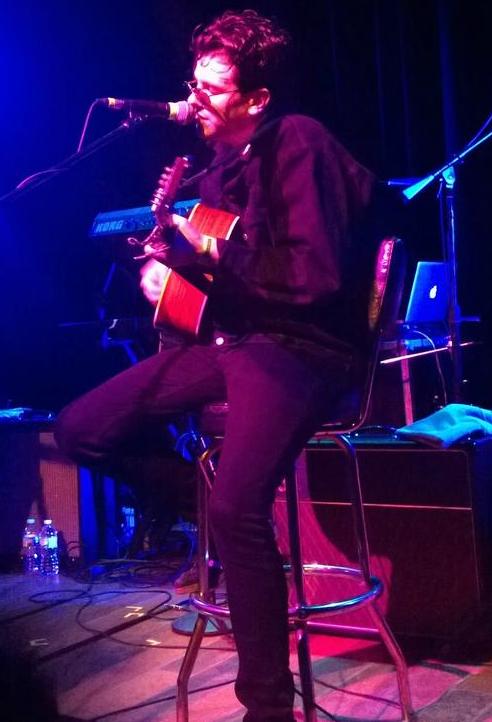 IT WAS AMAZING. Everything I could have hoped for and more. He played some old stuff, some new, and even a cover of Townes Van Zandt – Waiting Around To Die, which was great! Everyone went nuts when he played “Operation” and “Zombie” (shout out to Katie’s first “moshing” experience!), but what we really wanted to hear was “Sheila”. People kept shouting for it, and the crowd even started singing the lyrics the first time he went offstage. Jamie said “good things maybe come to those who wait”, and he kept his promise.

He came out for an encore, and sang Sheila! I got that one all on a very shaky, screamy video to send to Stacey, its kind of our song (well, they all are). Also, thanks to the encouragement of a guy standing by us, I definitely went for an ass-grab (sorry dad!) 😉

For the review, not that last thing.

I recovered the CD you made me and I will check it out soon.