I did something over the weekend that was SO cool, that even though there is only the slightest musical reference to qualify it to be included here… I just had to.

A long time ago Otis had recommended to me a pizza place that had an arcade in it. I thought it would be cool and I thought we should go, but as ideas often do… it got shelved for a bit.

Recently though it came to mind again, and I thought it would be a great outing for Joe and I. So, I told him we were going somewhere for lunch and we took off. We ended up there about 1 in the afternoon. 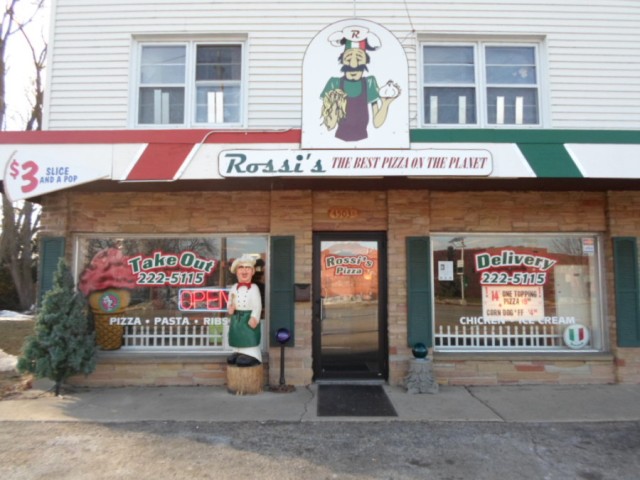 I opened the door and we went in. Immediately to the left inside is an air hockey table. There were some kids playing it and the air noise and clank of the plastic puck was competing with the conversations of the full tables of pizza eaters. Also in the dining area was a pinball machine and SPACE INVADERS! Oh man, I knew I was gonna love it. There is a dining area, an order counter and ice cream cooler like Baskin Robins.

At first I was aghast to think that these machines were it. Even though just seeing the Space Invaders machine threw me back to the Mickey Rat days. Mickey Rats was an arcade that Jeff B. and I frequented in Ann Arbor.

I knew Otis wouldn’t steer me wrong though, and as I got past the coat rack and beam in the dining area, I saw the magical sign.

It was near the back and pointing to the right. We headed that way and ventured into the dark room with the familiar sounds of beeps and boinks and pinball drop targets and rails bouncers. The first sight I saw was Galaga. NO WAY! I love that game. I recall Jeff and I playing that and GORF at convenience stores in our past. I stopped for a picture. On the wall next to Galaga was a KISS (with makeup) poster. This is the first of the skimpy musical references for this post. Don’t blink, you’ll miss it. Sorry the pic is dark, but I didn’t want to use the flash and freak out the poor kid playing. 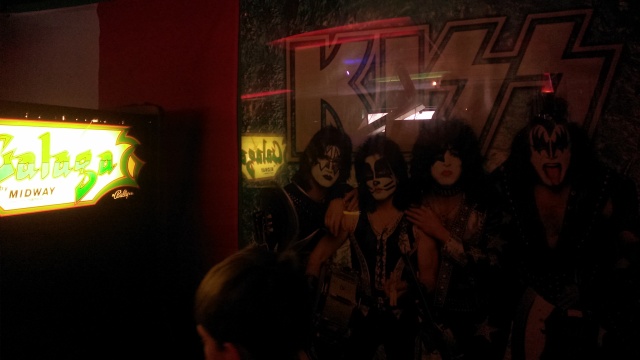 Joe and I ventured in and waited in a line to change out our cash for actual quarters. No token crap here. Real live quarters. Can you hear the noise of 20 quarters falling in a heap into the change machine bowl in your head? Good. Read on.

The arcade is divided into 2 rooms, the main room and the offshoot room which has less games but does have the pinball games. We ended up in there first and we settled into side by side pinball games. Joey had an unfortunate streak of balls down the center and was done while I was still on my first ball. He cam and watched me play and I was so digging the noises and sights and used all my flipper tricks and did really well. I switched and let Joey try the one I was on. He did good too. 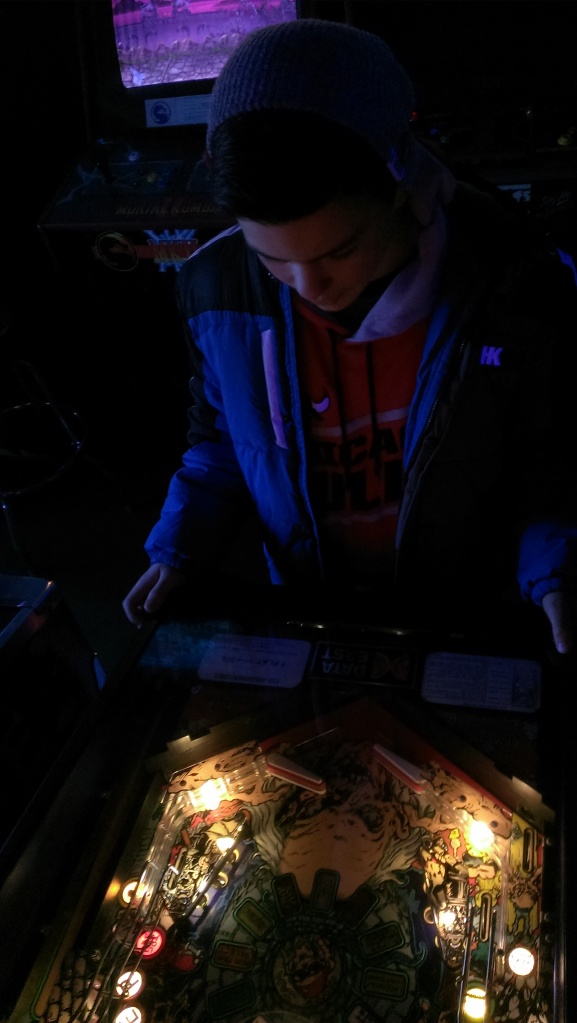 This room had black light posters, including a Hendrix poster! 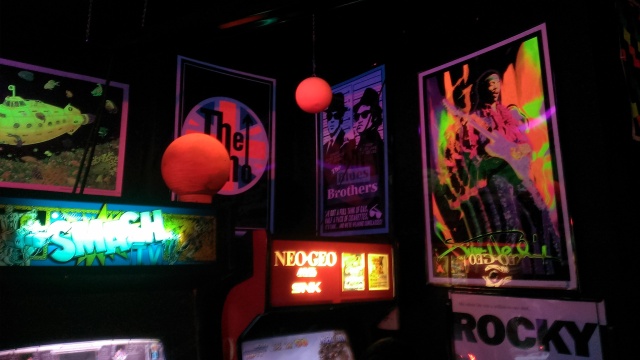 We then went to the main room to check out things on that side. That’s where Asteroids was. Someone was on it however, so we went down the back row. I walked past Joust, and ugh, Punch out (body blow body blow knock him out!). Punch OUt was next to the ban k of games I loved at Mickey Rat’s and made me nuts. Around the corner though was Mario Brother’s. Joey went for that one. 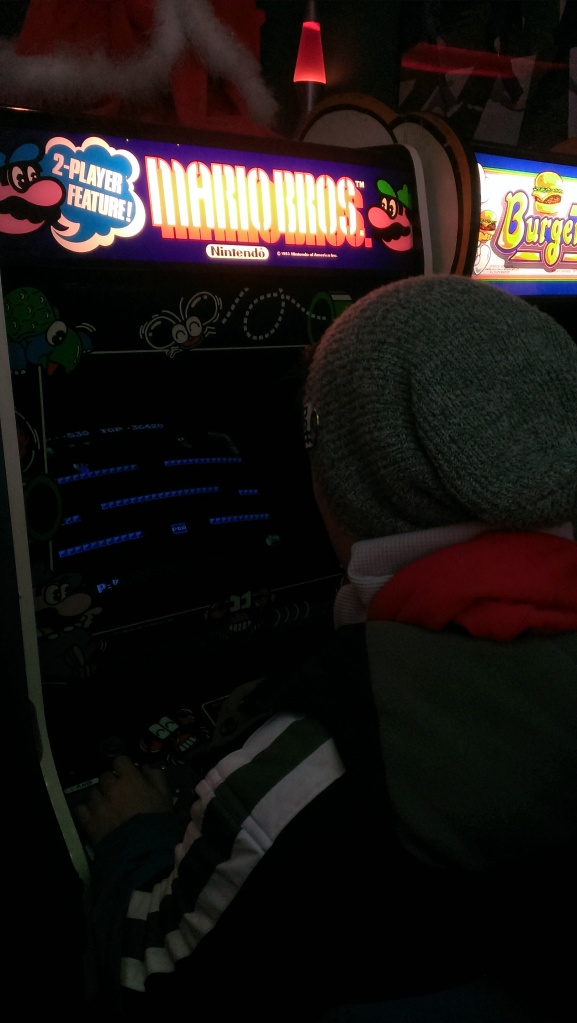 He had never played it before but picked it up quick. Then we played double. It was a blast. Then Joey played Burger Time. I heard him saying Burger! Burger! as he built them.

This side of the room featured music posters too! Beatles! Queen! Ramones! More Hendrix! 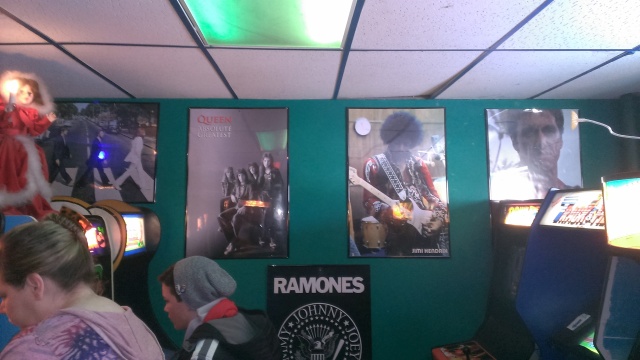 Behind us there was a guy playing Track And Field who was machine gunning the button to run. Joey actually stopped and looked. It was crazy. This guy knew what he was doing. There were other games on this side that I would have tried out but I wanted to work my way around to Asteroids. At the corner I could see someone was on it still, so I played Q-Bert. Boing boing boing…

When Asteroids opened I slid over to it and ceremoniously dropped my quarters in. Heaven.

Now Asteroids is about the simplest game you could devise, and I think it probably plays to my need for order from chaos, my organization predilection, and a host of other variables that lead me to play this above all else. You blast the asteroids and they break into smaller pieces, then you blast those and THEY break into smaller pieces and then again into the smallest pieces. Shoot them all and clear the screen and then it starts again with more large asteroids. This goes on and on. However, there are large and small spaceships that come out occasionally and try to shoot you. You have to temper your desire to blast all the big asteroids with how crazy it gets when there are tons of small ones flying around. 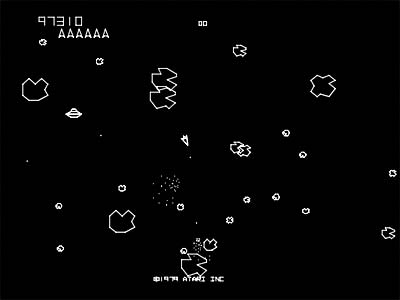 The image above shows the small spaceship which is pretty accurate and hard to hit.

OMG! (sorry to use that expression) but as I looked for a good image of the game I found a blog where you can play it!

You can also fly around to avoid things (dangerous), or, Hyperspace to another random part of the screen (also dangerous). I try to stay in one place at all times. I made Joey watch me play a few games and then he complied to his dork dad’s wish for a photo. 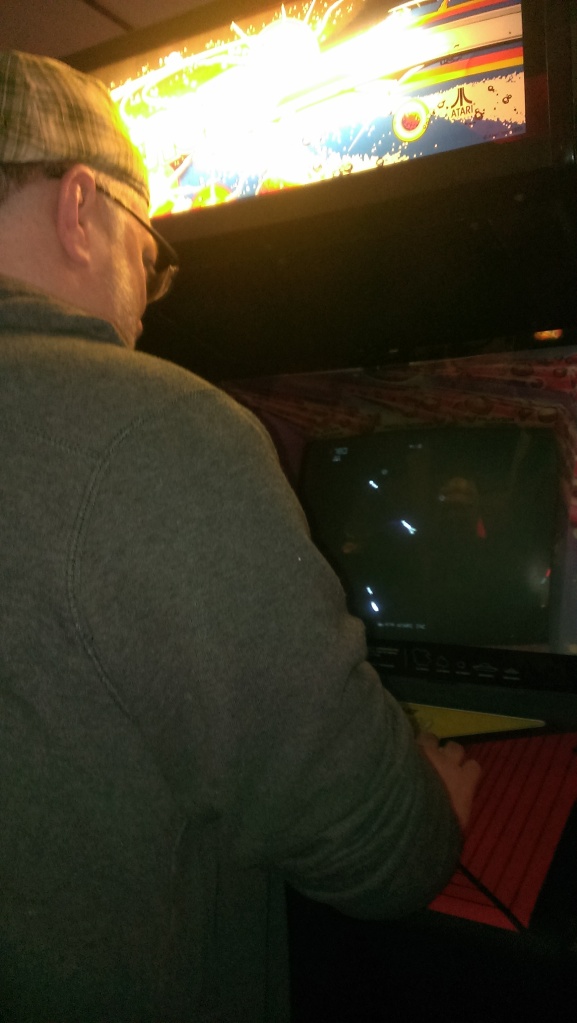 Then I let him give it a try. 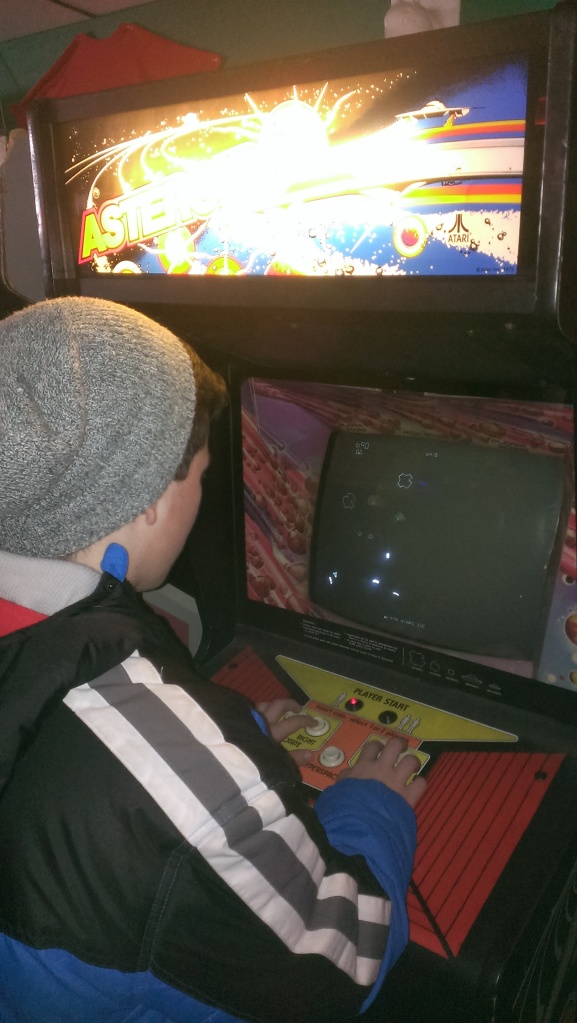 We played a few more, then headed out for some pizza. While I was ordering I noticed crates of vinyl records and a record player behind the counter. It wasn’t on, but that helped solidify this place as a 5 Star eatery in my mind. They must play records some nights? At the counter was the final bullet in the nostalgia gun. They sell Wacky Packs! I used to love these and had a huge collection. I KNEW I smelled someone chewing that horrible pink gum back in the arcade. Funny.

We ordered our pizza and then played some air hockey when it opened up and Joey beat me. Punk. Then I played a few rounds of Space Invaders before the pizza came. Then we ate and I dorked out on all the decorations in the dining area. It is an 80’s lovers playground.

Once the pizza was consumed (which was thin 2 handed style and pretty good) I convinced Joey to let me play a few more rounds of Asteroids. Joey hit the buttons at the end of my gamer and gave me AAA, but I changed it to AAX before I entered it. Couldn’t figure out how to go back to the first letters. Then I played again and I got High Score! So I am stuck with AAX. 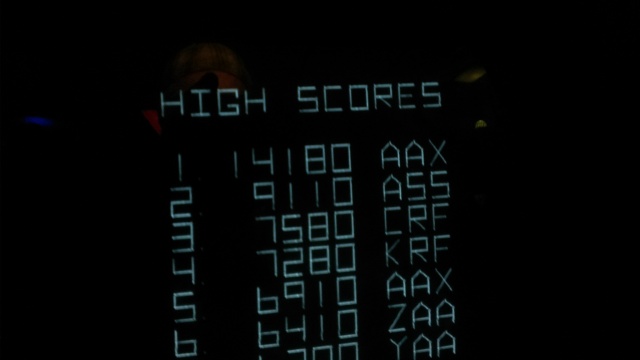 That seemed like a good time to call it quits for the day.

I am now actively saving all my quarters.