At Half Price Books West, few of you probably know about the tiny hallway in the back that houses the bathrooms, and fewer still that there is a bulletin board there. There are posts of upcoming book events, theater shows, music fests, etc. and I wonder who actually sees this stuff.

Something caught my eye as I prepared to use the facilities that I had to get a picture of. 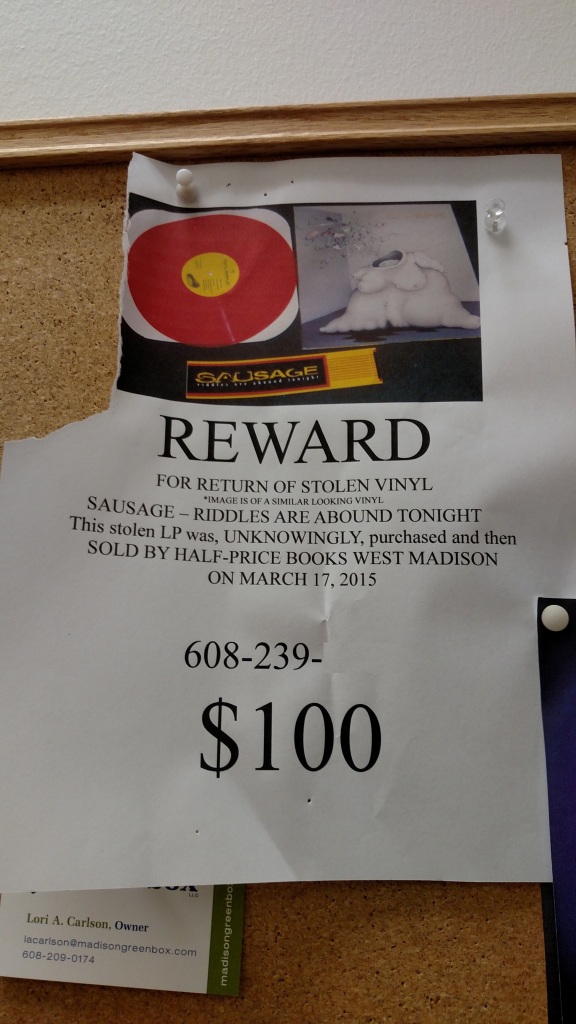 (shout out to Madison Green Box too!)

Sausage, I had to admit to myself was a band I had never heard of before. This person was offering a $100 reward? I had to check it out.

Turns out, to my surprise, Sausage was a one off band of Les Claypool from Primus, who I do enjoy. “Tommy The Cat” changed my world and he has a very unmistakable sound. I found a video for a song from the album.

If you just want to hear the album cheap, it can be had for (currently) 32 cents, plus shipping, on Amazon. But clearly, the missing album was on red vinyl and not lowly CD.

A trip to Discogs.com, one of my new favorite places list the album, and incidentally has the very picture you see on the poster, found that it IS highly priced.

On the other hand it has also sold for $40. So, the owner of the album, clearly on the hunt to have his property returned, is willing to pay top dollar for his (I assume) copy back. Maybe it’s signed, or he hid an important document inside, or maybe this is just his favorite album and he wants it back dammit!

I have the full phone number if anyone wants to pass along any information.

Keep your eyes open for this in your travels, it shouldn’t be hard to forget.