When you buy older records you are more often rewarded with an interesting sleeve rather than one of those plain white paper sleeves. Sometimes these sleeves are just advertisements for other records from that company, but every once in a while you get something like this.

I’ve seen this one before, but I just had to document it here. The coming and going and utility of records is painfully pointed out here. The bold title itself and the bold ending statement are perfect bookends to the questionable facts in between. Here is the text of the sleeve.

Here’s How Records Give You More Of What You Want:

The Best For Less. Records give you top quality for less money than any other recorded form.

Uh… yeah. Try buying some Led Zeppelin vinyl, or some Beatles vinyl then come talk to me. Whoa. Crap copies of The Beatles White album (on Capital!) are going for $25 bucks. Still someone needs to talk to this last seller and help them understand the real world. They don’t even include the poster and 4 Beatle portraits. Hmph. 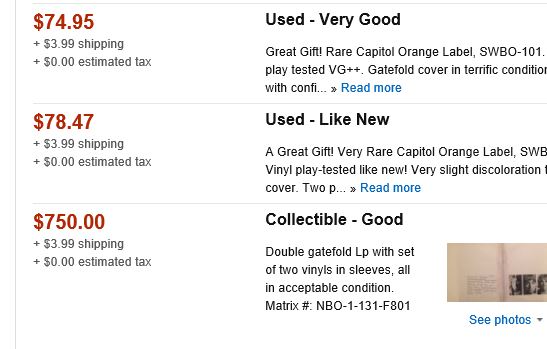 They Allow Selectivity Of Songs And Tracks. With records it’s easy to pick out the songs you want to play, or to play again a particular song or side. All you have to do is lift the tone arm and place it where you want it. You can’t do this as easily with anything but a phonograph record.

Say what? What about my I-pod, my phone, my computer, or my CD player (before IT goes into the history books.) Maybe more easily than my tape deck. You got me there. Good job records. You hang in there.

They’re The Top Quality In Sound. Long-playing phonograph records look the same now as when they were introduced in 1948, but there’s a world of difference. Countless refinements and developments have been made to perfect the long-playing record’s technical excellence and insure the best in sound reproduction and quality available in recorded form.

Hmm… there are probably those that believe this, all the organic sound lovers. Those that believe the best sound comes from vinyl. That debate has been going on since CD’s came along. To say that records look the same is somewhat true, but tell that to Jack White. https://auralretentive.wordpress.com/2014/06/29/portrait-of-a-music-nerd-2-of-them/

They’ll Give You Hours Of Continuous And Uninterrupted Listening Pleasure. Just stack them up on your automatic changer and relax.

NO! Don’t do that. Every record owner knows you are not supposed to use the stack and arm method. It damages the albums. Sheesh. To this day I remember as a kid my parents stacking Neil Diamond and Barbara Streisand albums up in a pile, putting the arm over them and hitting play. The first one played, then blam, the next one fell hard onto the one below, then that one played, and blam, and so on… and hope you didn’t stack too many and the needle dragged on the one it couldn’t quite reach, alerting you to the fact with a soul crushing scraping noise all across the last record. Sometimes, the stack was too tall and the toner arm couldn’t even make it over the stack and got hung up, wearing on the belt and mechanisms for hours before you realized and released it from hell. Yeah. For sure… R E L A X.

They’re Attractive, Informative And Easy To Store. Record albums are never out of place. Because the aesthetics appeal of the jacket design, they’re beautifully at home in any living room or library. They’ve also got important information on the backs – about the artists, about the performances or about the program. And because they’re flat and not bulky, you can store hundreds in a minimum of space and still see every title.

By the way, that is the actual punctuation they used. All you English major’s weep. So, this one they have right to a point. The records are art, and information yes, but the storage… tell it to my external hard drive, laptop or I-Pod. Storage IS an issue with vinyl. 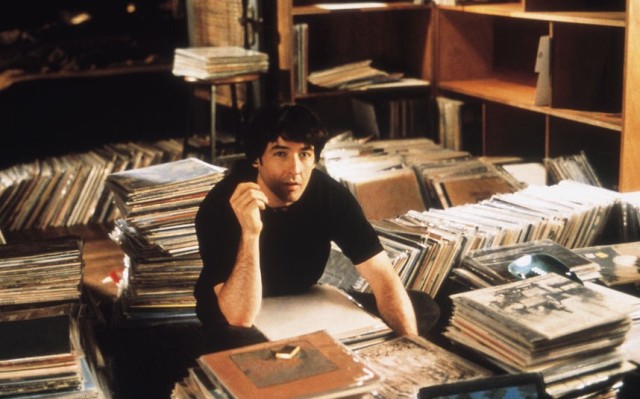 If It’s In Recorded Form, You Know It’ll Be Available On Records. Everything’s on long-playing records these days… your favorite artists, shows, comedy, movie soundtracks, concerts, drama, documented history, educational material… you name it. This is not so with any other kind of recording.

I… I don’t even know what to say about this one. You came, you went, you came back… and it’s still not true. Sigh.

They Make A Great Gift. Everybody you know loves music. And practically everyone owns a phonograph. Records are a gift that says a lot to the person you’re giving them to. And they keep on remembering.

Everyone? They do make a nice gifts, at least that part is right. IF you happen to still have a pho-no-graph player.

I will have to frame this sleeve. It really puts records in their place in history. Oh and I almost forgot to include the footer…

And Remember… It Always Happens First On Records.