So, in all honesty, for the past several years I have been sound asleep when it turned over to the New Year. Peacefully slumbering while cities all over the country were in full swing celebration.

Warm in bed with the one you love is a type of celebration, right?

At any rate, THIS year, I happened to be awake. There was the traditional New York New Years Eve Celebration with Pitbull… ew, no thanks. I ended up watching Chicago’s Celebration. They don’t have a ball that drops, they have a star that rises with the countdown clock on it. Different, but still cool.

What captured my attention was Chicago, not the city, but the band. They were doing a show, I assume in Grant Park for the celebration. I have a history with Chicago going back to the days of my mother and I living in South Bend when I was maybe 12 (?) listening to Chicago on our all-in-one stereo with the 8-track player. I dig the brass and the groove. At a point they went a little too soft for me, but the early stuff is in my soul. That happened to be what they were playing.

They were doing “Does Anybody Really Know What Time It Is?” (ha ha, get it?) and to be fair, the vocal range was a bit stunted by age, but the spirit was there and they were doing the choreographed brass section and it warmed my heart. Surprising for an old codger like me. 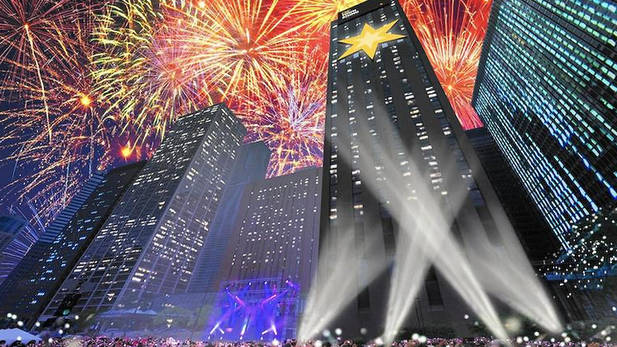 I gave Cindy a kiss, hugged Joey (also awake, NOT watching) and the new year began.

Chicago then started playing “25 Or 6 To 4”. It was the perfect bookend song. Different singer on this one, and again the vocals were not as sharp as in the olden days, and to be fair the looked like they were freezing, but still a really cool performance. Looked like a younger guitarist had joined them and was tearing it up for the solo.

You can’t really see it, but the guy above the word RISING is playing keytar!

So I rode out 2015 listening to Chicago and started off 2016 listening Chicago.

There have been far worse years.