Yesterday Joe and I drove to Kalamazoo to visit Abbey and the soft opening of the KZoo Cat Café. 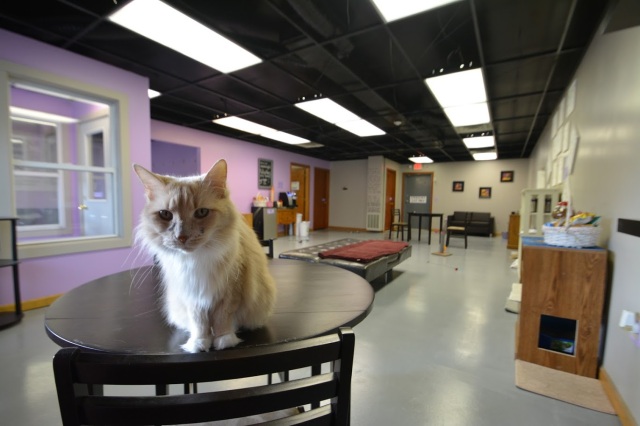 We snuck there and surprised Abbey. It was a long drive but we made it and delivered gifts and had our first real look at the café. There were indeed cats there, crazy and cute and very interested in the new items. 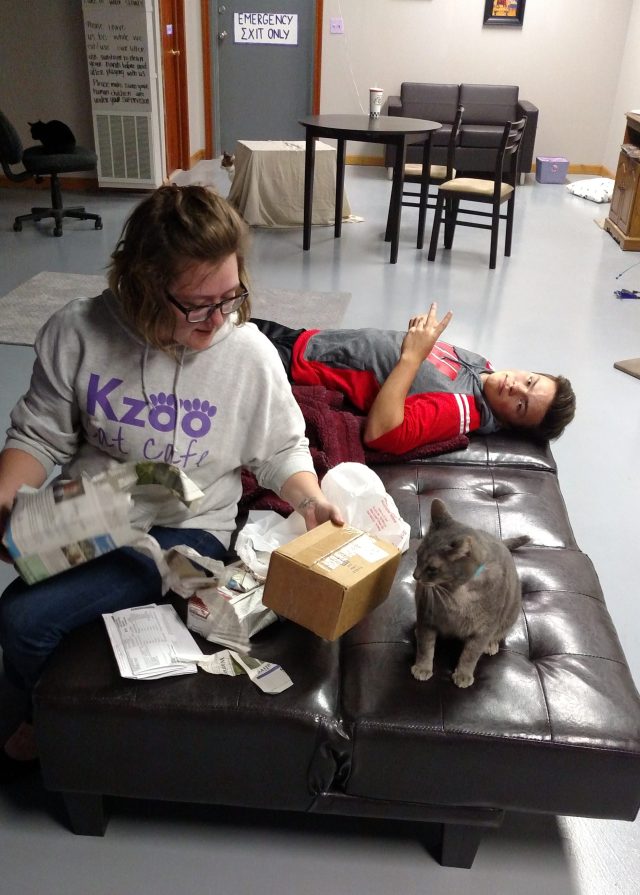 The Café is cool I must say and we explored and made some new friends (Hi Goldie!) and I picked up a KZoo Coffee Mug. Too far away to visit? You can get your swag here:

So… we arrived safe, and Joe drove (yes, I can hardly believe it either!) 4 of the 6 hours of the trip (skipping the nefarious traffic areas in Chicago and suburbs) which netted him his first 2 hours of night driving. He is a good driver and the trip went surprisingly fast.

Also surprising was his music selection. Knowing the drive was coming, he built a Spotify playlist for us. Alas, it was a short one and we were soon playing all of his playlists. Joe, like Max and Abbey, love all types of music and it was an interesting romp through the music he has saved to his lists. Many recommended by friends and some he has just heard and added, I was pleasantly surprised with the selections.

Which was good since he controlled the music (although I held veto power) for the entire trip!

Sure I skipped the screamo and machine gun bass drum tracks, but I heard good stuff otherwise. Van Morrison, Billy Joel, Lumineers, Offspring, classics and contemporary tracks and it kept us moving along.

I have to say I was pleased that we could go a full 6 hours just on the music Joe brought along.

And… we did all the music off of Joe’s phone! On the way back (my music) everything will be running off of a flash drive. What is the world coming to?! I don’t really have any CD’s to PLAY in the CD player in my new car (though it has a player) and Cindy’s car doesn’t even HAVE a CD player.

I recall a car that I drove, the yellow Maverick that we got from my mother, that I had to stick a folded piece of cardboard under the tape in the tape player to make it angle enough to hit the play head right to make the sound good. It was notorious for eating tapes too. Remember those days folks?

The technology of car stereos has really evolved.

Wonder what kind of gas mileage this baby gets.