No, I’m not talking about party games.

As with the didgeridoo, I found myself one day in the rabbit hole that is YouTube. I was looking to see if anyone made birdhouses from records (they do) and I ended up several videos later on a video called Double Dirty Swirl Acrylic Pour on a Vinyl Record. I laughed at the title, but when I saw it, I went from laughing to going… “that is frickin cool!”

After watching that I spent a few weeks watching Deby from the previous video and others doing various methods of acrylic pour painting and learned all the jargon. Swipes, floats, dirty pour, flip cup… and lots more. I was fascinated how a little cup of mixed paints could produce such fascinating results.

When I was in art history in school I secretly laughed at abstract art. It’s true. I felt like abstract art was like ambient music, just there but not enough to really draw you in, no hooks or rhythms… like elevator music, not rock music.

When I saw this stuff though, something in me just said… yes. I get it.

The cells, or large pockets are eye-catching and the colors are swirled and mixed and flowing within each piece enough to really give the eye some work. If you watch any of the videos on this technique make sure you stay to the end to watch the close-ups that usually follow to see the detail. It is amazing.

At any rate, I immediately thought about my record clocks, and how I sort of stopped doing it since it was difficult to find colored vinyl and/or interesting pieces to make record clocks from. My brain started writhing thinking about trying this for myself.

The supplies needed are not that much… paint, flow medium (basically paint thinner) and silicone (which helps create the cells), and if you are feeling fancy a micro torch to assist with cell creation after the pour. A trip to Menards, a trip to Michael’s and some Amazon ordering and within a week I had everything I needed.

On Saturday morning after Rocco (one of our dogs) made sure I didn’t sleep in past 5am, I ended up downstairs and decided to give it a shot. I mixed my paints, grabbed a record album cover (I figured that would be a handy test item) and gave it a shot.

Lessons learned from my first pour.

The part that DID pour right, did look good. So there was that.

So, I tried it again. This time I used the same colors, made them thinner, and used more paint. I grabbed a canvas this time and gave it another go. It poured, thinner this time, and I was able to cover the whole canvas, touched up the edges and gave it a bit of the ole micro torch. It worked!

Here is my first legit pour.

I used black, white, yellow and metallic gold. Booyah. I was stoked that it came out as well as it did. I had been prepared for mixed results like my record cover attempt, but after doing this one, I decided that my results were good enough to try it on the medium I was really wanting to try it on.

I mixed more paints, this time black, white, red, yellow and gold and thinned them even more. I put tape over the underside of the record to cover the center hole and this time I did it flip cup style. I put the record on top of the cup of paint and flipped the whole thing over. I gave it a moment to let the paint run down in the cup (actually using a pin to pop an air hole in the bottom (now the top of the cup) and after a couple of minutes… lifted it up and let the paint flow out in a giant blob.

Thinner this time it spread out nicely and covered the whole record with a little tipping here and there. I also used the mini torch on it to bring out even more cells. I was floored by how awesome it looked.

I liked how there seems to be a light side and a dark side. “Like the moon” Joe said when I showed him.

Here is a close up to see the cells. 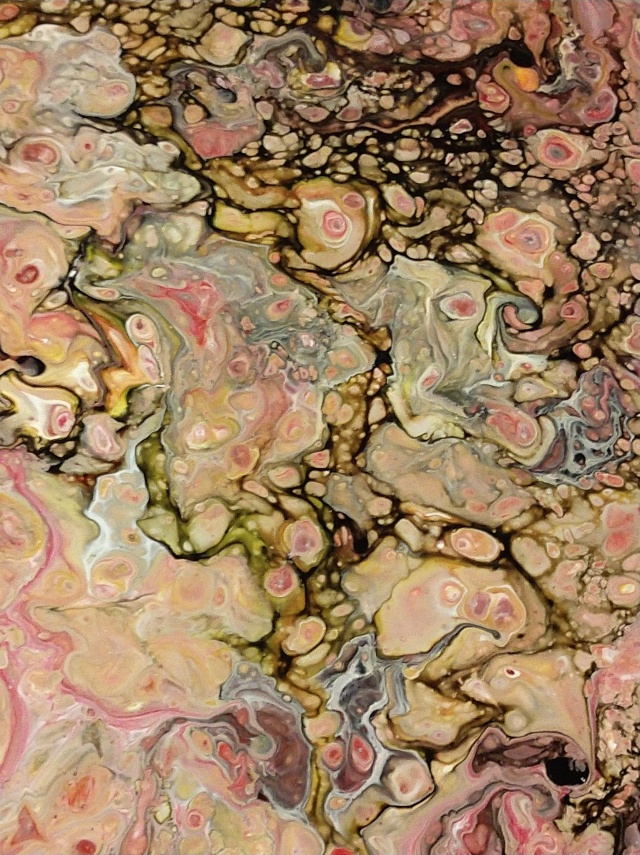 I removed the tape over the center hole allowing for the clock parts, and wanted to do more. I grabbed another record.

This time I used some of the leftover paints from the last pour and added some more. There was a lot of black in my mix and it shows in the final product, which is much darker. 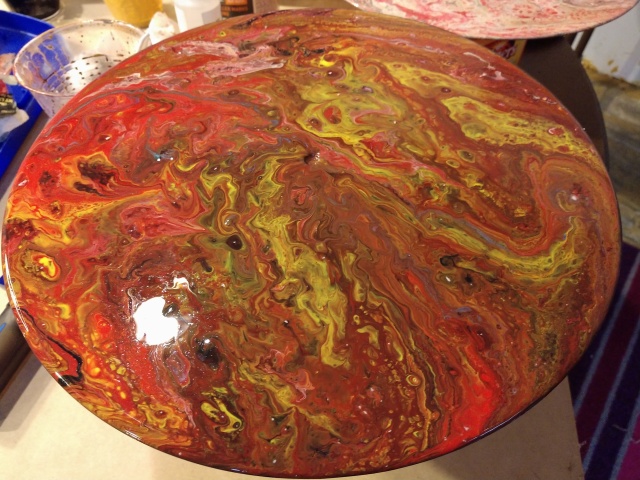 Still cool, but I liked the lighter color more. Will still make a nice clock though.

I had time for one more and I mixed up a lighter set of colors and added silver instead of gold. This time I poured it on an old 78 record. The lighter colors are a hit with me. This one didn’t have as many cells, even after I gave it the micro torch, but it came out fantastic.

So, it was totally worth it to get the stuff to try this out. I am stoked to try a swipe, a float, a spinning pour… and to do more records. There are tons of people doing videos about this type of art out there, sharing their techniques and supplies and methods if you are interested. About 10 seconds on YouTube should do it. Maybe you’ll want to try it too.

Yeah, I’m eating my words from my UW Milwaukee art history class all those years ago.