I thought I had posted this a while ago, but discovered it in my drafts. This happened a few months ago…

Yeah, so after gathering a lot of CD’s from the Library that they were giving away for free, culling their collection in preparation for moving in the coming year, or years, it’s a long story, I realized I had accumulated a sizable pile. I had been down this road before and had no intention of keeping them all. So I ripped them all, sorted out the few to keep physically, and the rest I boxed up and took in to work as I have done in the past.

I put them out on the “plaza” table with a sign. 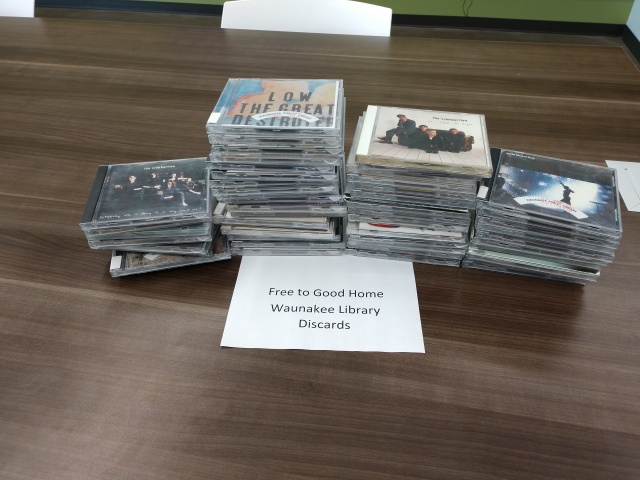 There was a real odd collection of stuff. I figured they would go as well as last time at least.

I straightened the pile and kept my eye on it throughout the week. Eventually it got down to just these.

This is what a bunch of System Analysts won’t take home. Pete Tong – Essential Mix, Underworld – Beaucoup Fish and Guided By Voices – Isolation Drills. To be fair, Otis might have taken the Guided By Voices, but he probably already had it.

Someone got the King Missile CD that had come from the famous Amoeba Records in Los Angeles. I wasn’t really sure how this and another King Missile CD ended up at the library, but I was happy to pass them on.

even though this one was from the “clearance bin”. It’s kind of cool knowing it traveled across most of America. Well, 2/3 of the way?