I make an exceedingly painful habit of needing to correct my wife when she has trivia about music wrong. You understand.

I try to temper it as much as I can. I KNOW that it isn’t really necessary for her to get the exact year right on the release of a Bruce Springsteen album, or know who originally wrote “Manic Monday”, or any number of random knowledge items I have stored away.

She gets me back though, intentionally attributing a song to a wrong band, or singing the lyrics to a Rolling Stones song at the wrong tempo and with the wrong words on purpose… it hurts my soul a little each time. She does it JUST to see the expression on my face. She knows I will react. So we’re even.

The other day in the car a song came on and she said “Oh, Twisted Sister”. I smiled and said in my best high school teacher voice “THAT my dear is Quiet Riot”. I thought she would back down with deference. Instead she reiterated her claim and I went to Google on my phone. You know, just to clear things up for her, which I presumed she would appreciate. Joke was on me.

This was the song:

I was thinking of:

To be fair they are both anthem-ish. Right? Plus I was never into these bands, but, when your wrong your wrong, and I was wrong.

Cindy was RIGHT, and The Aural Retentive was WRONG.

Sorry too to Dee Snider and Kevin Dubrow.

I found this picture of Kevin. Seems like he is admonishing me. 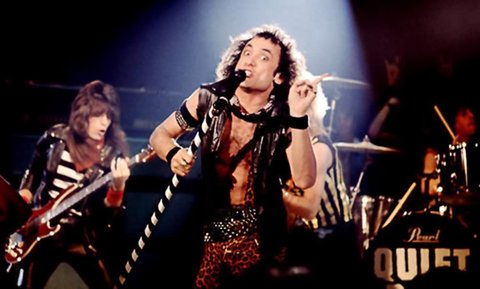