My friend Dalton was known to fabricate odd history nuggets to run past me and see if he could get me to believe it. Usually he copped to it and we both had a good laugh about it. Not always though. Sometimes I would have to go research it and call him out.

One tall tale he told me was that one of our favorite bands, Iron Maiden, had come to play a show and played soccer in Waunakee.

Waunakee, the ONLY Waunakee in the world and proud of it.

As there is no venue in Waunakee capable of hosting a rock and roll band the likes of Iron Maiden, I couldn’t quite believe that if they were playing in Madison, that they would detour to Wauanakee to play a pickup game of soccer. I gave Dalton my skeptical face and laughed. He proclaimed that he was “serious man”.

This story came up quite a few times, but with no way to corroborate it, I continued my stand that he was exceedingly full of it. He even took the step to try and Google it in order to prove his case but failed to find any reference to it. No proof smelled like vindication to me.

last week something came across my Instagram feed that blew my mind.

So in 1987 a player on the Waunakee High School Soccer team invited Iron Maiden to play some soccer and they frickin’ came and played. That player, Brian Ziegler, is now president of Badger Honor Flight. Well done Brian!

As it turns out, this is something Iron Maiden is known for doing on occasion. If you search for Iron Maiden Plays Soccer you will find several matches like these reported on.

Another fun fact, Centennial Park was my backyard for many years. My two older kids played soccer on that very same field, the hallowed fields once roamed by Bruce and company. It was way after 1987, but even since moving away from that area, I am still only a handful of blocks away from that park. Crazy.

A visit to the Mad City Music Facebook page, which first posted this pic that was then posted to Instagram, holds some interesting comments, like this one from Anders Svanoe:

“This was my senior year at Waunakee and I was at the game, but didn’t play. I mostly remember that they were late getting there and a whole bunch of “holy shits” came out when we saw the bus turn the corner. Once the bus stopped the band came running off the bus all suited up and ready to play. They seemed like big dudes–all business. I just sat and watched not believing what I was seeing. Not many people were there but the Waunakee Tribune took one picture. I know most of the people in that pic and will ask around for more stories, but will leave you with one from John G. Miller who was my good bud and locker mate in high school:
“This is a true story that’s at least 23 years old, but I’ll do my best to recount accurately, though my memory is fading, and I’m sure one of the other gentlemen could recall details better than I.
If memory serves, my teammate Brian Ziegler, stumbled across an ad in the back of either “Hit Parader” or “Kerrang!” (or maybe even that classic “Circus”) announcing “Iron Maiden’s” US ‘Somewhere in Time’ Tour” and that the Band would be looking to play soccer in the towns of the various tour stops just to kill time and blow off steam from the road. He answered the ad, and the next thing we all know, we’re all standing in our little beat up soccer field behind the HS and Maiden’s tour bus pulls up, they jump out with some Roadies and we play for the afternoon.
I can’t remember the score, but I do remember they seemed to be shocked that some puny HS kids from a little town would be willing to play as rough as the Maiden crew was willing to play (Euro soccer is NOT US Soccer)…so I remember things getting pretty rowdy on the field. I remember our Goalie, Jeff Jukes, going up in the air for a ball and drilling one of their roadies in the head with an elbow. I remember chasing a long ball down stride by stride with Bruce Dickenson, and laying a good shoulder into him and knocking him off the ball. I remember him cursing me out. (Whoo Hoo!) I remember Brett Werlein, our slippery forward, weaving through traffic, with Maiden guys diving all over the place, and Brett scoring. They weren’t real happy about that. Of course, I remember the scar on my ankle from Adrian Smith stomping me as I tried to slide tackle him…(not one of my better choices in life).
I remember that they were pretty cool guys afterwards, and hung with us a little before climbing back on the bus. I also remember that somehow we all got tickets and backstage passes for their show at the Dane County Coliseum for that evening, which for a 16yr. old kid, was a pretty big thrill. It was a crazy show, and “backstage” wasn’t a real drag either.
I don’t remember everyone that played, but I remember Jeff Jukes, myself, Brian Herbrand, Brian Ziegler, John Enge, Brett Werlein, and Neil Statz. My brain isn’t remembering everyone else so I have to apologize to all the others that were there.”

Here are some pictures supplied by Bradley J. McIlwee. 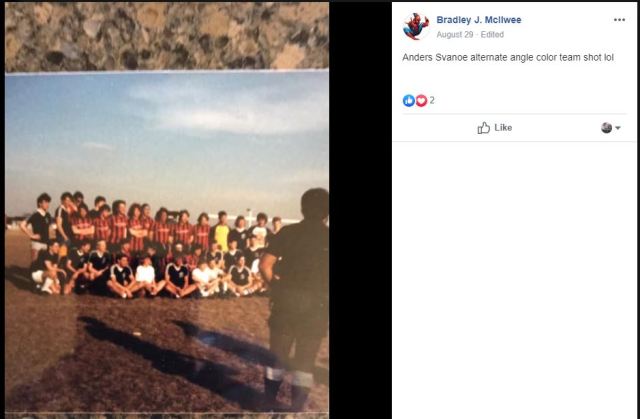 I thought I would pull the pictures and the comment into this post to preserve them for posterity, and to apologize to Dalton.

You were right dude. You were SO right.