To be 100% transparent, I just bought this album recently. In fact I haven’t even put it away IN the vault yet. I have owned this before though. In fact I purchased it on CD years and years ago. I don’t think I got it when it came out, I was never that on top of things, but somehow I heard “Change It” and decided I needed it. I was living with my mother (thanks Mom) in Brown Deer Wisconsin and this album was to change my life then, and has recently come into my possession as vinyl, hence including it here in The Vinyl Vault series.

I had been into Hendrix for as long as I could remember, and suddenly here was a guy that sounded very much like Hendrix, with all the flash and seemingly effortless and smooth changes that made it seem that it was just flowing out of him. I played this CD constantly. Constantly.

I had no idea that SRV had existed before this, but after buying “Soul To Soul”, I got his first 2 and they were also great, but this one is the killer.

Not too much later, when glancing through Relix magazine on break at work and seeing all the tape trading ads in the back I ventured into the world of bootleg tape trading. It took a good portion of my time, energy and extra money for a handful of years. High on my list of artists to acquire?… Stevie Ray Vaughn. I would grab all the SRV I could get. Everyone seemed to have a couple. He was popular.

Here is what I still have left. I digitized about 40 SRV tapes and gave them away (sad) but these remain. Twenty nine tapes of Stevie tearing it up. Hard.

I had tapes of live shows from all around the world. I had tapes of him playing before he even cut an album, playing with Lou Ann Barton, I had before and after sobriety, and even the last show at Alpine Valley in 1990.

I remember when I heard the news that SRV had gone down with the chopper after the show. It was a dark time for such an SRV fan. This was a long long ago though, over a decade! Hard to believe.

The tape trading days are LONG over. It’s the digital age, and what THEN took me weeks to mail away for, now takes seconds to download. One particular set of tapes that I traded for, waited a month to receive and cherished for a very long time, was almost 6 hours of SRV in the studio during the Soul To Soul sessions. False starts, chatter, silence (yes, long bits of nothing), versions and version of the songs that would eventually become the album and a bunch of goofing around. I couldn’t believe someone had a recording of it all first of all, let alone that someone owned the tapes, and I was able to trade some Nirvana and Nine Inch Nails tapes for the whole batch. Of course no one but me in my circle of friends was into SRV enough to want to listen to this, but to me it was pure gold.

These days it is out on YouTube for all to listen to who have 6 hours and 24 minutes to spend.

I am at once sad for all the effort that I put in, and glad that if my tape ever fails, I will have this.

If I am reaching any SRV fan that wants more bootlegs, definitely check out this SRV Bootlegs You Tube channel.

One odd thing about all the SRV bootleg tapes I owned is that only a couple actually contained the song “Change It” which drew me to SRV in the first place. I never knew why it was not a staple of his show.

At any rate, recently in the New Arrivals section at Strictly Discs I came face to face with a vinyl copy of “Stevie Ray Vaughn – Soul To Soul” and I had to get it. 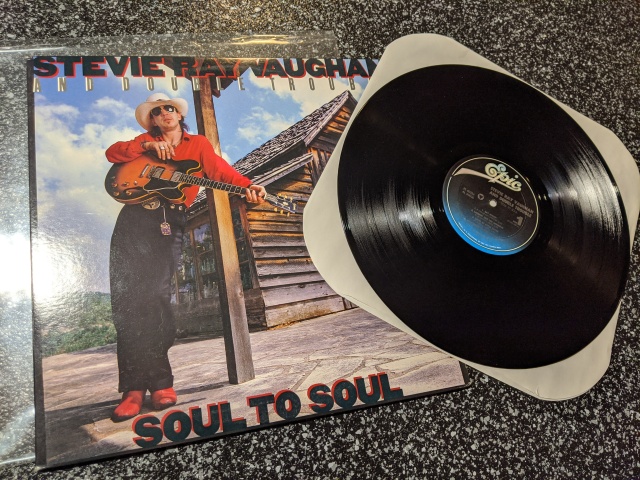 I have my favorite bootlegs, El Macambo Toronto Canada 1983 and Fitzgeralds Houston Texas 8/14/81 but it was this album I always came back to when I needed the polish of a studio album… this album has it all. It was exactly right for me back in the day, and hearing it on vinyl now, it is still perfect.