It started with a comment from Dan B. who had read my post about Stevie Ray Vaughn’s “Soul To Soul” album.

He and I have spoken about music and live shows many times, and exchanged some music too.

Some people like music… but some people LOVE music. Those are the kind of people that will burn you CD’s hoping you will realize how great the music is and love it as much as they do. Dan B. has given me some great blues classics (still got ’em Dan, and another big thank you!)

and some bands that I never heard of that I came to really dig, like Black Joe Lewis and The Honeybears. I’m listening to the Freddie King pictured above as I write this.

At any rate, it was the conversation about Stevie Ray Vaughn that set us off. He mentioned that he had bootlegs that he listened to still in his garage. A few he described and I was of course intrigued.

After our conversation I sent him my list of bootlegs.

This caused him to write his list of bootlegs… 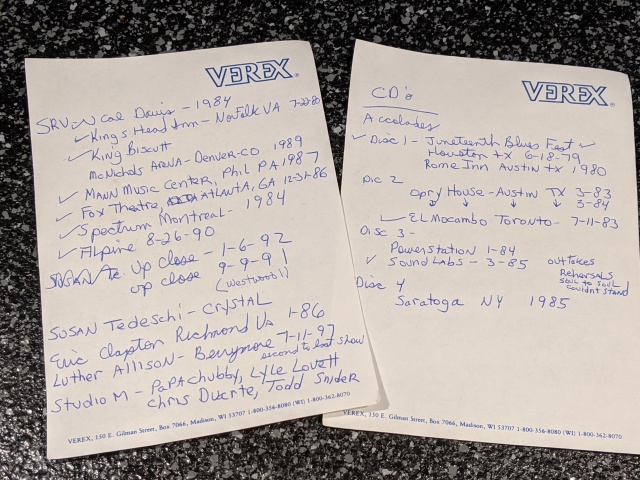 and caused us to talk together as not only music nerds, but bootleg tape trading music nerds to boot. I was like “ooh, El Mocambo 7-11-83 ! I had that recorded from a old grainy video that I came across” and he talked about a show that Lonnie Brooks came out in the oncore and I was like “YES! I have that one.”

We also talked about how we would make backups tapes of particular favorites, Dan making copies for use in the car and keeping the pristine copy home and safe. Also buying tape labels and mailing. I mentioned I used to let until the tape counter hit 30 before I started recording so that rewinding all the time wouldn’t wear and stretch the start of the tape and ruin the music. Dan knew what I was talking about. Sigh. Nerds.

I hope no one was watching that exchange.

This led to Dan graciously lending me the 4 CD package of Stevie boots entitled Accolades. Here is some interesting info from Discogs with a few corrections from the track listing shown on the back. Also info from the booklet about where the tracks are taken from. 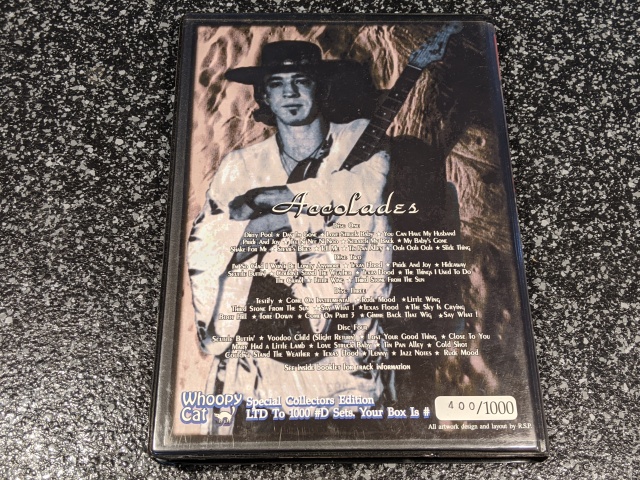 This is on Whoopy Cat (records?), and marks the first time I have seen a numbered bootleg series. 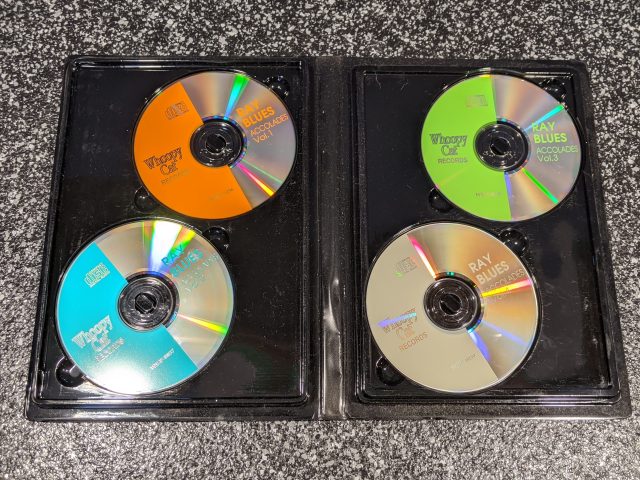 A far cry from the plain white sleeve with paper sheet glued to the front of some vinyl boots I own. Pretty sure I have the Fitzgerald’s show in the pictured poster.

Anyway… as if this wasn’t music nerd enough for you, then I offer this.

Dan noticed that one of the Buddy Guy shows that I myself bootlegged from my list was one that he had gone to. We both discovered that we were there and at stage front for the show. Likely we were only a few people apart. When I described how Buddy, shredding for all he was worth, would flip his head side to side and literally fling sweat on me, Dan was like “YES!”.

The next day he sent me this from his album.

I was like OMG YES! I was bummed that I didn’t keep that ticket stub, but I countered by sending him a pic of the Buddy Guy stubs that I do have thanks to Dalton who saved them and returned these to me years later. 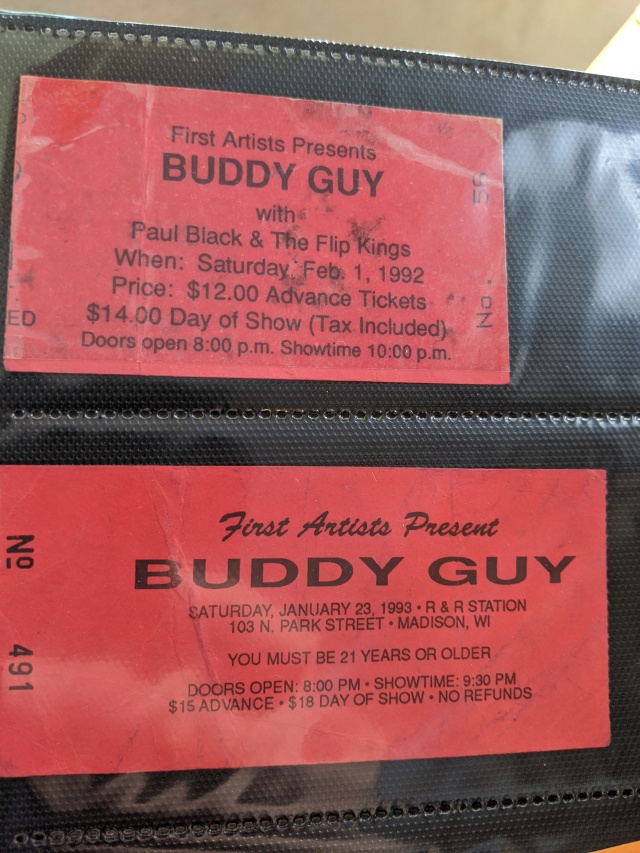 I described to Dan the bootleg that I made of the 91 show at R + R Station and went the extra mile on creating a cover from the photo and article that appeared in either the Isthmus or the Journal after the show.

Extra special because for some reason Dalton wrote the label. Also folded up inside the tape case is the article.

I absolutely love this show. It was his Damn Right I’ve Got The Blues tour and I will never forget how blown away by the whole thing I was.

I put the digitized version of this and a few other local favorites that I had recorded including Paul Black and The Flip Kings (also at R + R Station) and Mel Ford and The Fairlanes at the Crystal Corner.

On Friday we achieved full-blown music nerd status by each bringing in our ticket stubs to show each other. Dan’s binder was FULL of great blues shows and festivals and years and years of great music memories. I was ferociously jealous of all the incredible music he has seen.

However, it did give me pause and a real smile to know that I am not the only one out there who is into this kind of stuff as much as I am.

You know, you read about them, but to run across one in the wild is a rare treat.