I have scoured the records at The Frugal Muse (a favorite Madison used book store) before, usually finding nothing. Big Band, unkown rappers and easy listening/country. I had searched there last year looking for vinyl for Abbey. There was nothing she would like. The little section they have always seems to have the same stuff each time I look.

During a recent visit there however, the section had like doubled in size!

I immediately set in on it. This time I had success.

This album was a staple in my metal days. I was (and still am) a Roth/Van Halen fan. Nothing after David Lee exists for me. I know people that like Van Hagar, but I could never stomach it. This album features one of my favorites, “Take Your Whiskey Home”. On the strength of that song alone I paid the whopping $4.98 price. There are some of my not favorite tracks on here, but you can’t argue with “Everybody Wants Some” and “…And The Cradle Will Rock”. Van Halen classics.

Also found “The Police – Ghosts In The Machine” 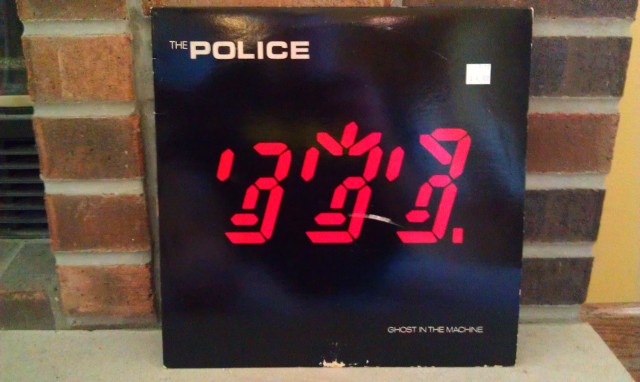 This one I had on cassette way back when. It was not well received by some of my Police fan friends. Too future vision-y for most, but it is one of my favorite Police albums. I love every song on this album, even the one largely in French. It is a bit dark, but the music fit my moment, and I still love it. This one was also $4.98.

They also had “Bruce Springsteen – Greetings from Asbury Park, NJ” but it was $9.99.

I passed on that one.

I might regret it and will be heading back.