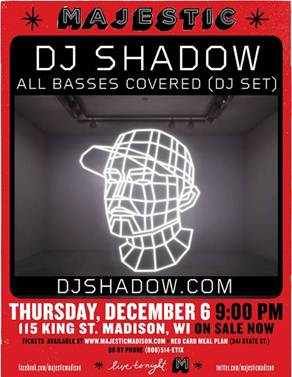 I was turned on to DJ Shadow by my friend Kris B when I worked for Marshall Erdman. He lent me a stack of CD’s and as I sat one night watching one of my kids swimming lessons in the bleachers, I put on “DJ Shadow – Entroducing”. I had no idea what to expect. Kris said that he mixed music. I had no idea at the time what that meant.

It blew my mind.

It was my gateway to turntablism and acid jazz and artists like Q-Bert and Cut Chemist and DJ Krush and even Jurrasic 5.

So when Kris forwarded me the e-mail that DJ Shadow was coming to Madison for the first time, I knew I had to be there. I ordered tickets for Cindy and I to go. She had no idea what she was getting herself into. Welcome to fiancée world. I got tickets, you’re going with me. This was actually going to be our first live, at a venue, music experience when I bought the tickets. Though we did see The Kissers at a wedding. Not exactly the same.

After I bought them we had the chance to see Meshell Ndegeocello, which turned out to be our first, but who’s keeping track.

When the night came Cindy and I drove downtown and were walking up to the Majestic right at 8 when the doors were supposed to open. I attempted the obligatory marquee shot.

Version 1) would have been awesome with the Capital building in the background, but the sign bled out. I include this shot anyway because you can see my friend Kris, damn near first in line standing just outside the building with red and black coat and black hat. 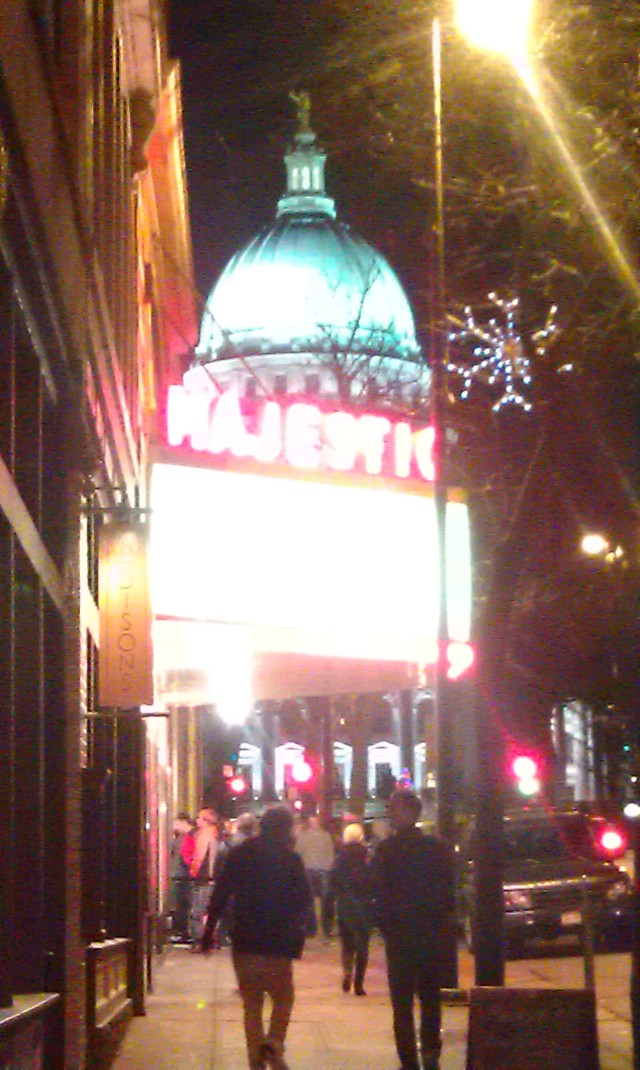 Version 2) As we got closer the marquee cooperated. 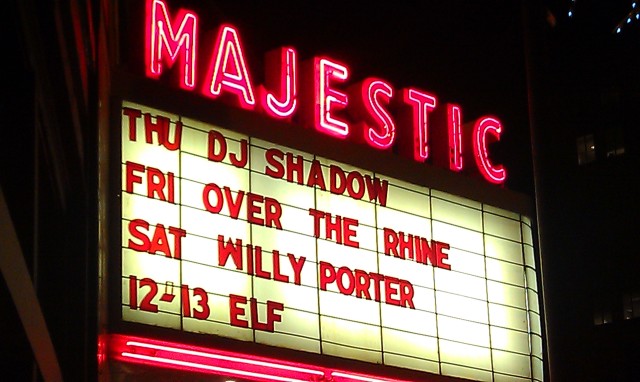 As we approached Kris hailed us and told us that he was going to save us 2 seats in the balcony. Then the line started moving. Our timing was perfect. Then they took our tickets and tore off a piece. Here’s what’s left. 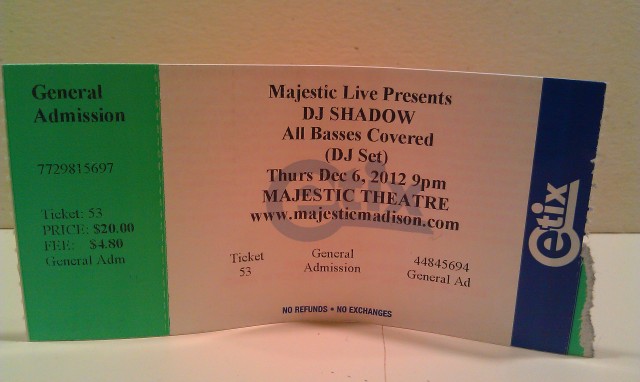 One of the more gentle ticket takers around. I understand the whole process of making tickets invalid for re-use, but come on. The Meshell show they tore the ticket and gave me back like a third of it. Ugh. I guess I can’t complain about this one. I just hate that whole process. I am going to make a point of telling the next ticket guy to be gentle and only tear off the bare minimum, since I save them. They’ll understand, right? Anyway…

Once inside we could see the simple stage and a merch table. We found the stairs and headed up to the balcony. It was actually a very cool set-up. There were booth type seats that spread out from a central stairway. Small tables were sprinkled throughout for drinks. There was even a bar and a bathroom upstairs. We settled in and started the long wait for 9 pm.

The stage from our view.

As I said, simple set-up.

So we had plenty of time for the obligatory “we were here” shot.

and a shot with Kris B. 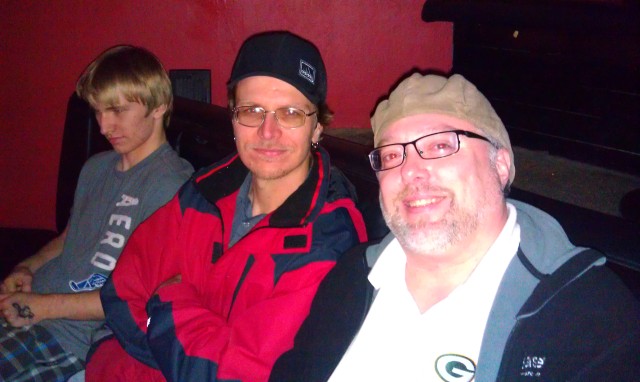 I also had time to visit the merch table. There were CD’s, DVD’s, T-Shirts and… VINYL! I had a look at the record, didn’t recognize it, caressed it a little then put it down and went back to the balcony.

Then, I went back and bought it. Here it is framed by the stage.

More on this later.

As it approached 9pm I ran for a couple of waters and then we settled in and waited for the house soundtrack, to stop and the good times start.

We amused ourselves with some people watching. There were all sorts in there. Even a couple of dudes older than me. Lots of stocking caps and hoodies and a few couples that looked like they were on a date. The dance floor in front of the stage was now packed and I was double glad that Kris had been here before (he saw The Black Keys here!) and knew the balcony was going to be the place to be.

Now I was getting anxious. Kris said there was an opener.

9:45…. finally a guy comes onstage and steps up to the front table rig. Man Mantis. I had to appreciate the guys command of his equipment, but overall, it was too loud and too long. Maybe it was just because I was worried now about the time we were going to get back home. Mom was watching Joey. Or that I hadn’t even expected an opener and no matter how good, it was just what I had to get through to see DJ S. Or that I was worried that Cindy was going to hate the whole show. The best I can say is that is was just not for me. He was using a laptop and all sorts of electronic devices. I know there are people who actually talk this way, but he was like “I’m gonna drop some dope beats that I made”. It was almost a caricature. He did about a 30 minute set. He had videos on the screen going along with what he was doing. I thought I was seeing things during the first video… there was a bug fading in and out. Eventually I got it.  It was a bug in a suit. Mantis.

When Man Mantis was done there was another wait.

When DJ S walked onstage about 20 minutes after Man Mantis, he grabbed the mic and addressed the crowd. He was soft-spoken and made mention of the fact that this was his first time in Madison and that the show tonight was sold out and he thanked us for that. This shot is from Shadow’s website fan uploads (more on that later). 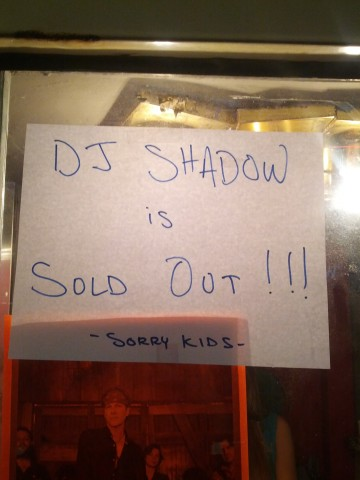 Then he went on to explain what he was going to be doing. He was going to be using CD’s for his mixing, explaining that clubs these days were not set up for working with vinyl, that there was too much feedback and also that some modern artists that he mixed weren’t even on vinyl. I was a bit taken aback by this, but was going to keep an open mind. I was ready for anything. Which was good, because just before he started to play DJ S said this in regards to his set that night : “If you don’t keep an open mind, you’re gonna struggle”.

His stage rig was simple. Two players, a mixer and a percussion pad.

Of course the lighting was harsh or dark or both so my pictures are grainy and awful, but they are mine.

I have him in zoomed in red

And in zoomed out blue

The music was awesome. I didn’t know any of it really, except about 2/3 of the way in when he played “Organ Donor” and one of the “What Does Your Soul Look Like” versions. He even commented that he was playing these so that you would understand that he was THAT DJ Shadow. Funny.

He mixed and scratched and tapped out beats on one player or the other and eventually he opened up on the percussion pad. From where I sat it looked like the surface was blank.

But he sure knew where to hit it.

He pounded out some thundering beats, and of course went faster and faster and faster until the BOOM at the end and moved on to something else. His transitions were so clean you hardly noticed when another song was starting. At one point he mixed in The Simpson’s theme song. He also mixed in some of “The Chain” from “Fleetwood Mac – Rumors”. That was very cool.

The crowd got more and more interesting as the night wore on. There were glow stick twirlers that kept getting shut down by security. There were people dancing hippie style in the stairway of the balcony. One girl in the VIP area was busy trying to apparently conduct DJ S with wild arm movements that were out of control. The people on the dance floor were undulating as a single unit and moving up and down and heads were spinning and bobbing like their necks were broken. I was very happy to be in the balcony.

This was an amazing show, one for my mental history books, even though it wasn’t the vinyl mixing session that I had been expecting. Even Cindy liked it! Man was I tired and worn out though. After a full day of work, and a big dinner at Brocach (Shepherd’s Pie), a long wait for the show to start and being bombarded with bass, we were spent.

He announced his final song and when the heart driving bass finally faded and the applause roared we headed for the exit. We didn’t end up leaving there until almost 12:30 and got home just before 1.

The next night, while looking for info on the vinyl I bought at the show: 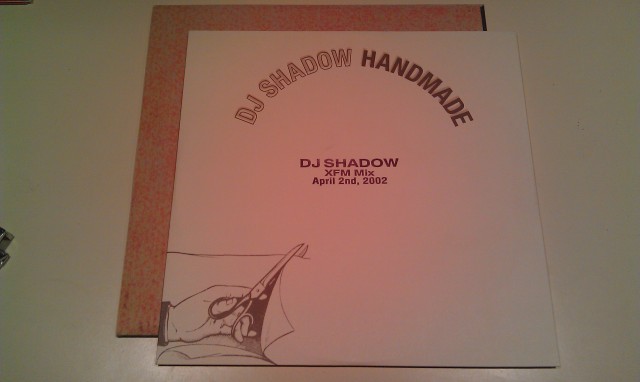 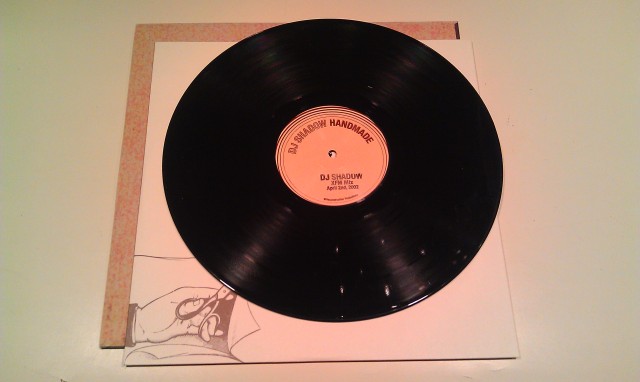 I discovered http://www.djshadow.com his official website. If you are a fan, this is the place.

There is page here that fans can upload photos and comment on shows. So, nerd that I am, I added a photo of the vinyl I bought and left a comment as SpikeMasterD (it’s a long story).

There was a good pic from down front by anonymous. Check out DJ Shadow on KCRW. This is a very good look at how he makes the magic.

Overall rating 9.5 out of 10. Only the long wait marred the perfect score.

Please come back to Madison soon!