The day that we ended up at Pawn America, we were first at the Goodwill store that is near it as a last attempt. No luck on receivers there, but they did have a record section. I actually had to wait for 2 guys to finish digging the small pile before I had a go at it. They each pulled a couple, so I figured there would be nothing left that I wanted, but since I was there I dove in.

Surprise. There were 2 that I ended up buying.

This is their first, and I knew “Black Magic Woman” and “Evil Ways”, but you never hear the instrumental jams on the radio. I had no idea what the rest of the album was like until one day a friend’s brother played this one and “Santana – Abraxas” back to back. I was blown away. The sound was like nothing I had really heard before. That was one summer I spent at my father’s place in Indiana. When I got home I immediately went out and bought from Meijer’s Super Store “Santana – Borboletta”. I had seen thia album in the Meijer’s bins plenty, but was miserably disappointed. I tried really hard to like it, but, in the end it worked it’s way to the back of the crate. I eventually got “Abraxas” and learned again how great Santana was. Then I picked up another current album, “Santana – Zebop”.          Fail.

Years and years later I was given the entire Santana catalog by Dalton. I was determined to give each and every one a fair try. You know, maybe my taste had matured and I would now find that the ones that I passed on before would be turned into life changing testaments to the power of music in my life. No. I made it through the first 4 or 5 and a live album and then after that, it was just work to get through them. Sorry Santana. Your newest new stuff I like, for instance “Santana – Supernatural” but I likely won’t be searching them out on vinyl.

Anyhow, I put this one on the record player and jammed it while I was cleaning up, and despite the record itself looking pretty scratched, it played smooth and was awesome. A great buy for a buck. Love the Gregg Rolie vocals. He went on to be the lead (at least for a while) singer for the early years of Journey. I love the instrumentals as much as I love the radio tracks that everyone knows. Great album!

I also found this. 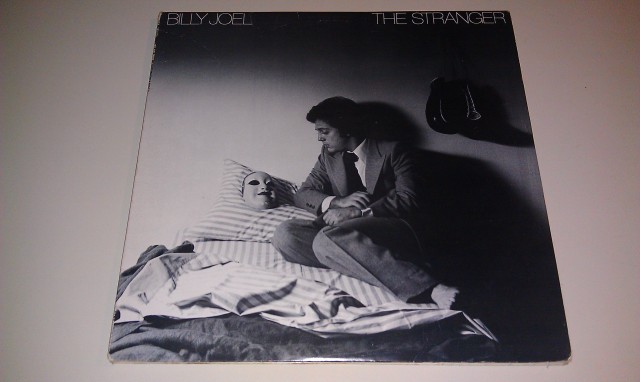 This album, and “Billy Joel – 52nd Street” reminds me of my mom. Amongst the Barbara Streisand, Donna Summer, Chicago and Neil Diamond (later years) my mom had Billy Joel. This one was pivital in my life. After my parents divorced and the console stereo was gone (not sure where it went) mom and I lived in an apartment on the edge of South Bend. All I had in the way of music was what my mom had, and my 45’s. We had one of those all in one stereo jobs at the time (with an 8-Track in it!) and I was starting to play some of her stuff now and then instead of listen to the radio. Everyone knew Billy Joel from the track “My Life” off of “52nd Street” but this abum got a little more play in our apartment.

I would play this and sing along to every song, they are all so good. I almost got radio burnout out on “Just The Way You Are”, but songs like “Scenes From An Italian Restaurant” and “Anthony’s Song (Moving Out)” and “Only The Good Die Young” are undeniably etched in my brain forever. We had an apartment that had a spiral staircase to an upper room that had a railing for one wall that overlooked the living room below. The stereo was up there for a while and I would go up and down the staircase flipping records. That was a cool apartment, and Billy Joel will always remind me of living there with mom and listening ther records, and discovering some that I still play to this day.