The English Beat was awesome! 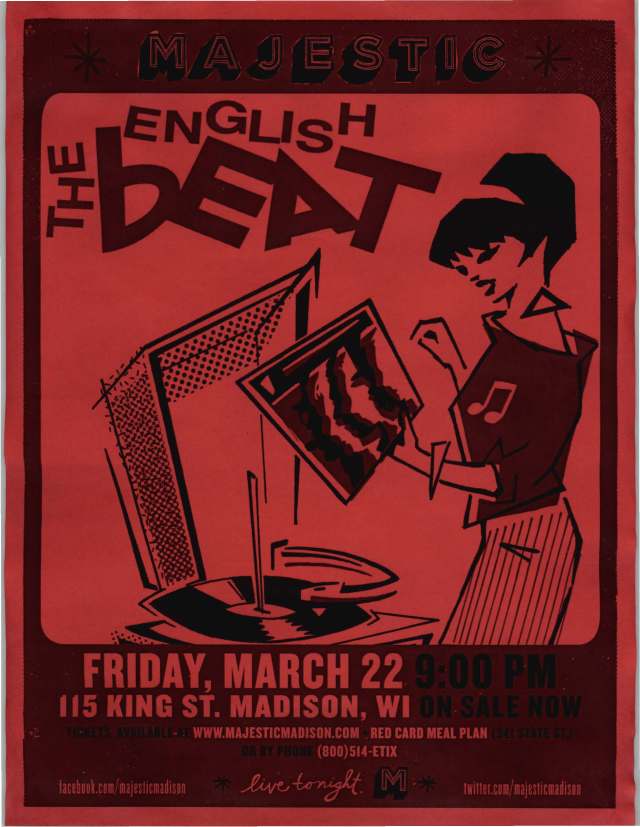 We drove to the Capital. The Majestic is right off the square. Couldn’t resist a nice picture of the dome.

Parking was close and after a few blocks walk we came down King Street. I love the way the marquee shines.

I didn’t recall that light pole being in my last shot for DJ Shadow. I tried from the other side. The lighting was not as good from behind the sign, but no pole at least. 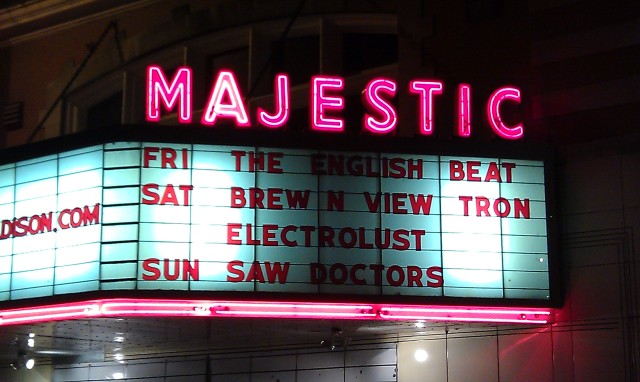 The Majestic is very cool inside. There is a bar and tables and a “dance floor” in the lower space and a balcony above with VIP seating on the right hand of the stage and padded tiered seating directly opposite the stage. The railing goes all the way around the balcony with the left hand side having 5 seats and a drink rail then some plain railing to the corner. That is where we ended up, against the rail next to the chairs. It was a good view actually. It was close and to stage right. Once I confirmed with security that we were not going to get kicked off of the rail, like the rail that goes in front of the balcony seats, we staked a claim at the rail and waited for the opener.

The opener was T.U.G.G.   I had actually heard an interview with these guys on WSUM (91.7) earlier in the week and they sounded interesting. They described their influences and it was all over the board. I really had no idea what to expect. They were great! It was a good mix of ska and reggae. I didn’t know any of the songs, but they were good. The guys really looked like they were enjoying themselves. At the start of one song the guy in the chair closest to me went nuts, ripped off his sweatshirt to reveal a “Specials” t-shirt and yelled to me over the music “That’s the Specials!!”. He loved it. T.U.G.G was very good and I think I’ll buy some CD’s.

I also found this picture that shows Andy (from TUGG) with Dave (from The English B).

During the break after TUGG the “Specials” guy offered me his seat as he went to the downstairs to meet a friend and hang down there and so Dalton and I had seats with drink rail right across from the VIP area. It was awesome.

I walked over to the tiered seats and took a pic of where we were sitting. These seats were awesome! Before The English Beat came on Andy (from TUGG) tried getting in the door you can see behind Dalton. I gave him the thumbs up. He smiled big and came over to me. I told him “Great show!” and he shook my hand and said thank you. It was nice. I’m definitely going to buy some TUGG.

Also this picture that Andy Instagramed of the crowd. You can just barely see Dalton and I in the upper far right sitting in our chairs.

I took another pic of me and the rail and the stage to try and show how close we were. 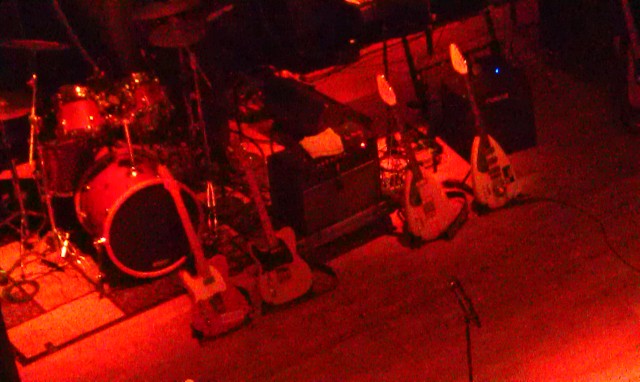 When they came out the place went nuts.

The band was grooving and Dave was great and I knew every song and sang and chair danced and loved every minute of it. These guys were awesome. Hands down the best show I have seen in a long time. Our seats were great and I got better pictures than at DJ Shadow. The lighting in the Majestic makes them all glow a different color. 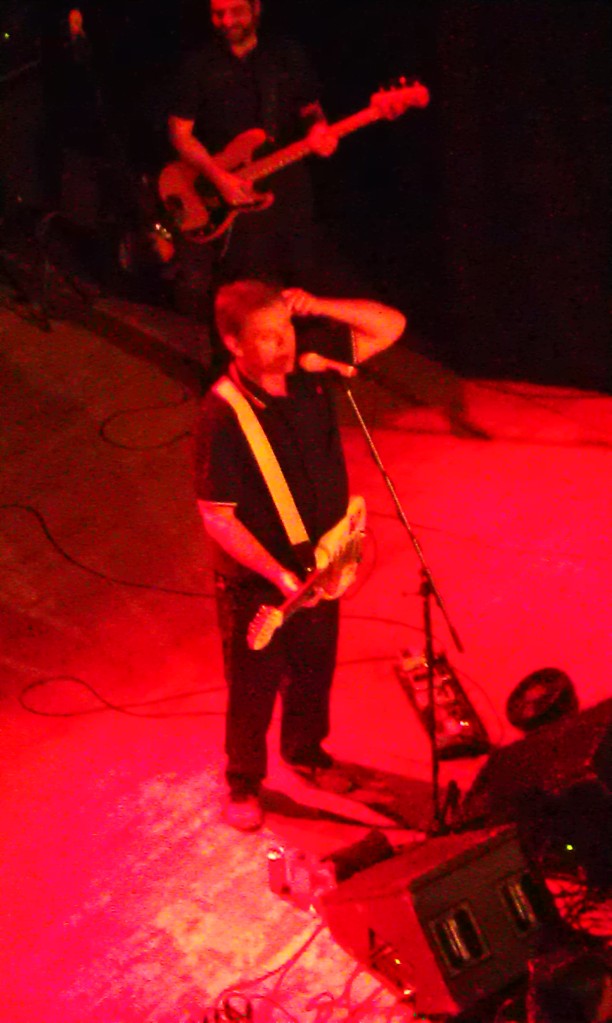 Dave was funny and talkative and the rest of the band was great too. The sax guy was on fire. It really set the sound off. It ehoed and punctuated all the right places in the songs. 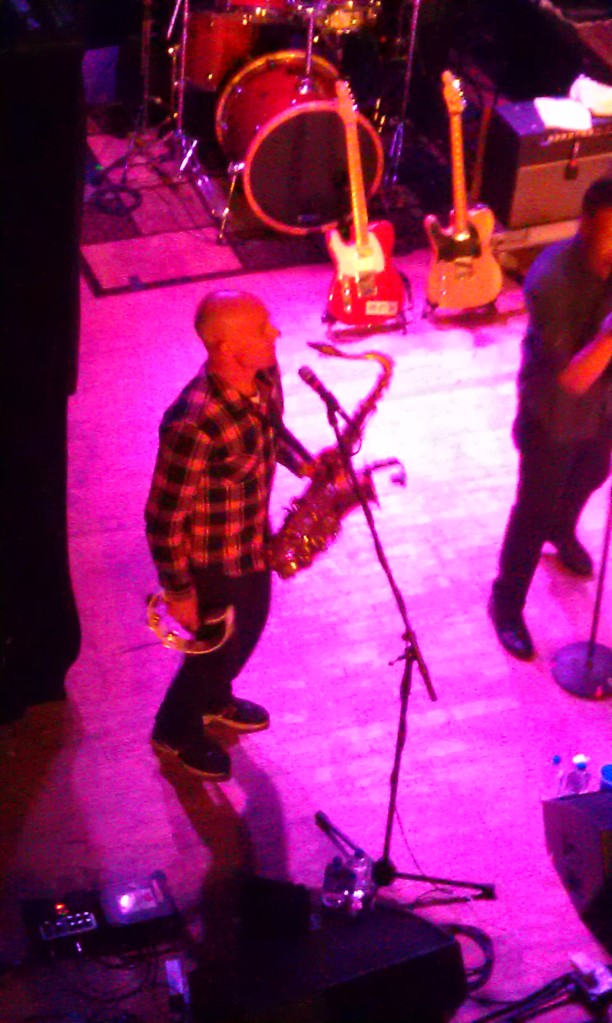 The band tore through all the best of the groups work and even “Tenderness” from General Public. Each song was amazing. When he played songs from “Special Beat Service” I was SO taken back to the day, even though they didn’t play them the same way, and the solos were extended, they were awesome. This was a $20 show that was priceless. Even Dalton who is not really into this kind of music was grooving on it.

The crowd, as evidenced by this picture was, lets say… older. 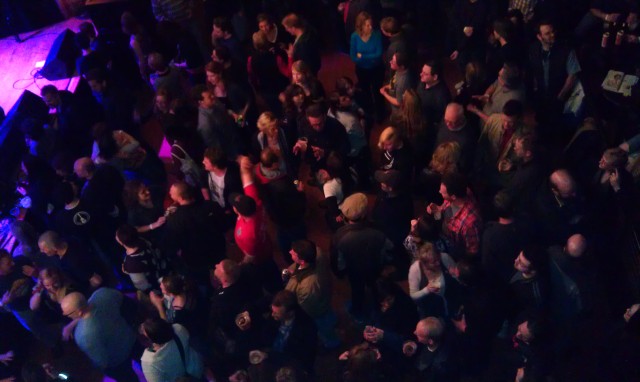 There were a lot of bald or balding heads down below (including myself) but it was nice to not be the oldest one at the show.

Art Paul Schlosser (who was playing outside before the show) made an appearance inside.

That’s him in the sweater and arctic hat. That made it a real event.

The English Beat played non-stop hits and the crowd was eating it up. There was a small mosh pit during one song, but it was pretty sedate and the rest of the time the crowd was just jamming and dancing in place. Dave spoke between songs and really engaged the songs. My fear that the band would be “off its game” since the 80’s was way off. Like I say, the songs were arranged slightly different, but I loved it. I am SO glad I was able to see this show. Dave came down front and was shaking hands at the end of the show. This guy is great.

My last picture of the night happened to catch Dave bowing to the crowd.

It was a great show indeed.

This was a show to remember. Great job Dave Wakeling, the rest of the band and TUGG!