I had $10 in Best Buy Reward coupons and they were going to expire in a week. I figured I could get a good album for about $20, so I started looking. Lo and behold, there was a re-issue of the original “Nine Inch Nails – Pretty Hate Machine”, and it was only $11.99!!

It came neatly packaged in a cardboard box.

Note The Kissers CD. That was on Cindy’s shelf. We saw these guys live at the wedding last year. I’ve gotta have a listen to this. Anyway…

I carefully opened the box. 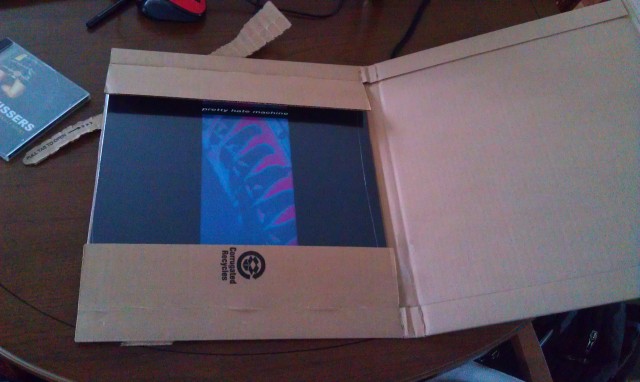 There it was. So beautiful. Before I opened it I took a moment for a self-portrait via reflection.

Then I tore off the plastic and emptied it on the counter. At first I thought there was just the white inner sleeve, but there was an insert too. I remember trying to read all this on the tiny little foldout in the cassette case. Pouring over the lyrics. Wondering how Trent got into my head.

This album came into my life in the dark days of Marshall Erdman.

I had heard this music playing in a record store at the mall one night when I went there after work. I asked the guy what they were playing and he pointed it out to me and I bought it, on cassette! It was a very influential purchase. This and Jane’s Addiction hit my life about the same time and I was so ready for them.

The ahhhh come-a come-a!! lifted from Jane’s Addiction at the end of “Ringfinger” gives me a chill every time.

I am going to play this, once, then it goes into one of the album cover frames that I bought a while ago for permanent display.