I heard from Abbey that David Bowie had a new album coming out.

I love Bowie, hands down one of my favorites. I have been into Bowie since the early day when I first heard “Space Oddity” on WABX in Detroit. I have owned every Bowie album at one time or another over the years.

It is true that there are some albums that I don’t go to very often.  The transition albums as Bowie clawed his way out of the late 80’s are not my favorites, but then he hit the “Tin Machine” era and then blew my mind with “Outside”.  Since “Outside” I haven’t really been rocked to the core by anything… it’s not bad, just not my favorites.

That being said, when Abbey told me about the new album, she sent me a link to the video for the song.

I have to admit that at first I was not a fan. It was slow and plodding and definitely not “The Gene Jeannie” or “Queen Bitch” or “DJ” and that is what I wanted at the moment. So… I waited a few days and then took another listen. Better. It grew on me. Then the video for “The Stars (Are Out Tonight)” was released and I saw that one.

Now that was what I wanted to hear/see! It was good old David with a progressive up to date feel.

That gave me a better feeling that the album would be good and not just an aged rocker making music beyond his prime. I know that is hard to believe with respect to David Bowie, but it had been a long while since his last release. There is always the chance that things could go wrong.

My proof that it hadn’t was when the album was streamed on I-Tunes.

I listened to the WHOLE album and I was pleasantly surprised. It is great. Taking the song “Where Are We Now” in context of the whole album is a much better way to go. The album goes fast and slow and as a group of songs they all work together fantastically. I chided myself for being so superficial at my first listen/viewing and had to agree with most of what I read in reviews, that this David Bowie album was, in short, wonderful.

To me the true test of an albums relevance and playability is: would I put this on random on my I-pod, or listen to the CD straight through. If there are dogs on the album that I would want to skip through, or wouldn’t want to encounter on random, then there is no way it can be a 5 star level album. This one is.

Apparently, Bowie kept the making of this album crazy secret. He made collaborators sign Non-Disclosure contracts and even when he release the first single it was just given to I-Tunes and there was no advertising. People that happened to run across it, download it and love it spread the word.  This is a testament to the huge career and success that David Bowie has had. He just puts it out there and we (I) HAVE to see what he’s done. It’s David Bowie after all. I recommend this album HIGHLY.

I have to say, the album cover is straight up awful. 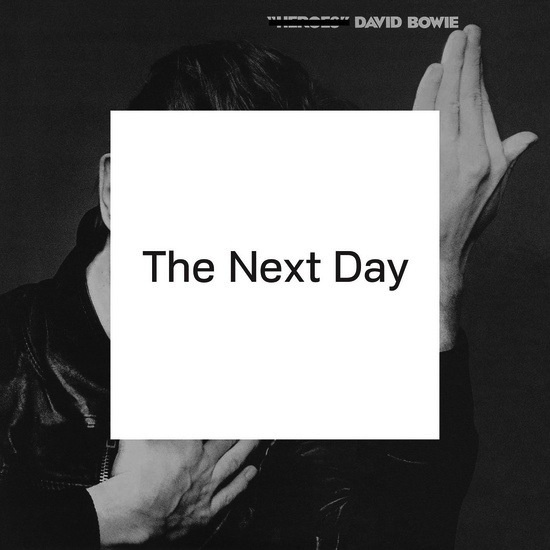 In the beginning I thought that this was just an image to hold the place for the upcoming released album image, since I saw it before the actual release of the album. No. This is it. The “Heroes” album cover with a white square over it with the text “The Next Day”. The “Heroes” title is crossed out. I am stupefied by this. Honestly.

I am not prone to emoticons, but it is hard not to use one here. Not only do I find it ridiculous, I have read reviews over and over that people love the symbolism and the juxtaposition of the images, the negative space, the retro-futurism, bla bla bla…

I am reminded of “Spinal Tap – Smell The Glove”. It was nothing but a black album cover. Imaginary I know, but the feeling is the same.

I know that I have professed love of the overtly artistic album cover, even falling prey to buying some more for the art than the musical content, but this one? I have no doubt that David was involved in the process of commissioning this “cover”, but I am calling this one a fail.

Again, the album is fantastic. I need to emphasize that. The only weak spot in my opinion is the cover. Sigh.