I made a few more stops to pick up old clocks to make a few more record clocks for an upcoming garage sale. One stop was to Savers in Madison.

I was really only interested in the clocks, but I had to check out their tiny little record section. They seem to have a lot of ethnic records like Bavarian drinking song collections, children’s Sesame Street albums, the obligatory Barry Manilow Live and other odds and ends. I was pleasantly surprised to find an album there that I had been looking for. The jacket was in rough shape and the records were falling out, but the actually looked to be in good shape. 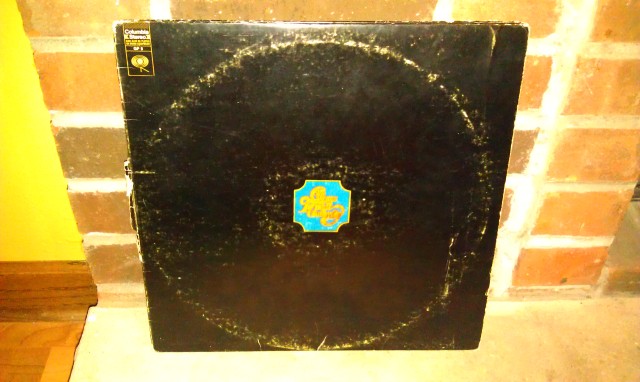 This is Chicago’s first album. On it is the song that made me, almost accidentally, give Chicago another chance from the 8-track days that my mother shared with me. You see, it was after the night that I heard the blues radio show on the radio show out of Chicago. I thought for a long time that the song “Mannish Boy” was called “I’m A Man”. If you know “Mannish Boy” you gotta give me that one. At any rate, when I found this one at the library, I though, “oh… Chicago, I know them…. meh. Wait! They do “I’m A Man?! This I gotta hear!”

Well, as you know, this was not a cover of a Muddy Waters song. However, instead of being disappointed, I loved it. It was fast and grooving and not the poppy Chicago I knew from the 16 and 18 numbered albums I think my mom had. This was good stuff. Edgy and jazzy and rocking. So finding this at Savers was quite a coup.

There was a half torn piece of paper on the record bin that seemed to indicate .49 for a price on all the records. A double album for 49 cents? I had to get it.

There was also a jazz compilation I picked up to make a clock with.

The guy at the checkout, who told me that he had been in charge of books and music recently, was mad that they had not priced this album higher, particularly since it was in good shape. Unmarked records are .49 cents though per their policy. I do not doubt that if this record had come through on his watch it would have been his. So for the clock and the double Chicago album and the jazz album my total was 3 bucks and some change.

Ironically, this is the Chicago album that contains the song “Does Anybody Really Know What Time It Is”.

At any rate, I added the new clock to the pile to dismantle. Over the week I took them all apart, painted some of the hands and created 4 record clocks to sell at the garage sale that Dalton is having, and 2 for myself.

There are 2 albums, the jazz compilation (hidden left) and a “Three Dog Night – Suitable For Framing” (on the right). There are also 2 78’s. A Coral Records “More Beer” by The Ames Brothers and a Decca Records “It Only Happens When I Dance With You” by Guy Lombardo. The hands on the clock I used on this one screamed 78. They are kind of old time fancy.

I also created a desk clock for my work from the “White Stripes – Icky Thump” CD that Abbey gave to me. The CD is still playable Abbey. Fear not. The tiny little arms looked too small even on a 78. They would only work on a CD, and this was the coolest looking CD of those that I have left.

Finally, I created a clock out of my “Neil Diamond – Jonathan Livingston Seagull”. This one reminds me of my father. He loved this album, and I know he would love this clock. It will hang in the sun room. I will eventually replace this album. I’ve seen plenty of copies around.

Interestingly, I can hear all of these clocks ticking. The table where they are awaiting the garage sale is near me. 5 clocks all ticking in unison. Tick… tick… tick…

I’m waiting for all of the alarms to go off.