First of all, the show was FANTASTIC !

I have to admit I had my doubts about how the live on the street thing was going to go, but the sound was great, the stage was intimate and the bands were awesome! I would go again to the Live On King Street series again in a heartbeat. On top of all that it was free!

As we turned the corner from the parking garage and came up the street by Madisons bar we grabbed a “we were here” picture with the marquee in the background. 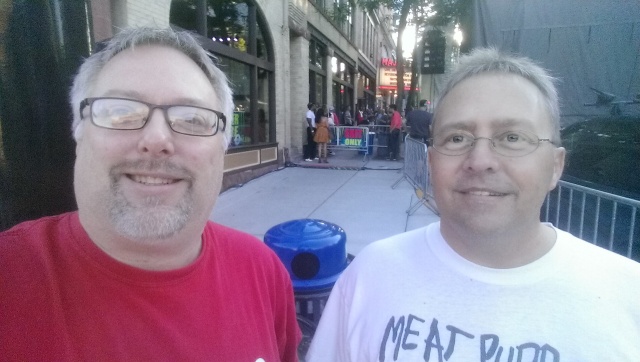 A roadie who was behind the fence behind us complimented Dalton’s Meat Puppets shirt.

Front view of the marquee.

We had arrived just as the first band was playing its final song. Sorry White Iron Band. I bet you were great too. We got wrist banded and picked up a few freebies. 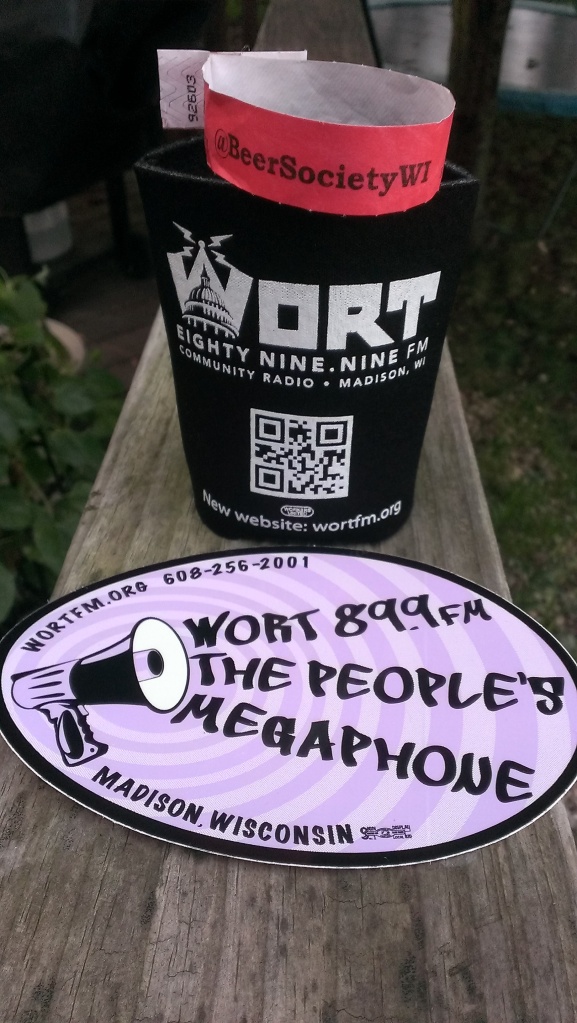 WORT can coozie! Sweet. Then we wandered around and got the feel of the area. I noticed the concert cam button I had read about and we wandered over. They had a camera set up in a second story window 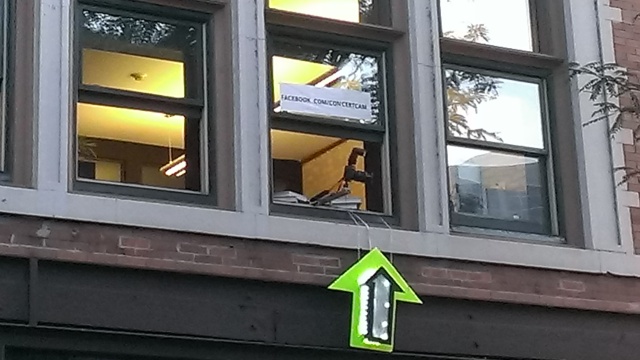 that took your picture when you pressed the button. It took about 15 minutes to find ours

Were you there and wondered where those pictures would end up? Go find your shot.

Amazingly I spotted a friend of ours in another shot. Hey Adam! Did you dig the show?

Then I fell under the spell of the merch table and bought a Reverend Horton Heat hat.

Complete with Texas flag on the back.

I proudly wore it the entire night.

The crowd during first band to second band change-over vacated stage front and at that time it wasn’t packed yet, so Dalton and I staked a claim on the stage fence with the wooden deck you can see in this shot at far left.

It was nice to lean on and we were as close as you could possibly get without a press pass.

The view behind us was nice. There was not much air movement between the buildings, but the sun was going down, so we didn’t get roasted. The sun was coming down next to the dome. 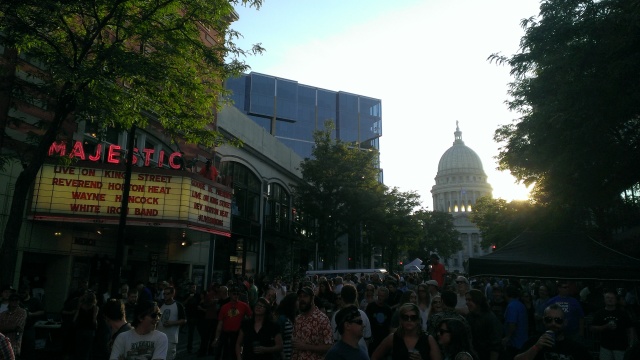 Then changeover was quick and up next was Wayne Hancock.

Now Otis had given me some Wayne “The Train” Hancock to check out when I told him about the show. I can’t say I was a big fan of what I heard. Sorry Wayne… (but keep reading). As with things that are new, sometimes you don’t give it a chance. I mean, it was basically straight up honky tonk. Not my normal speed. I wasn’t looking forward to that part of the show very much. A surprise was coming to me.

No drums, but I didn’t find it missing. Wayne tapped out the startup rhythm with his foot on the stage, thump thump thump… I was immediately into it. This is not what I would ever think I would enjoy, but I sure did. The standup bass was awesome to hear and he looked like he was having a great time. 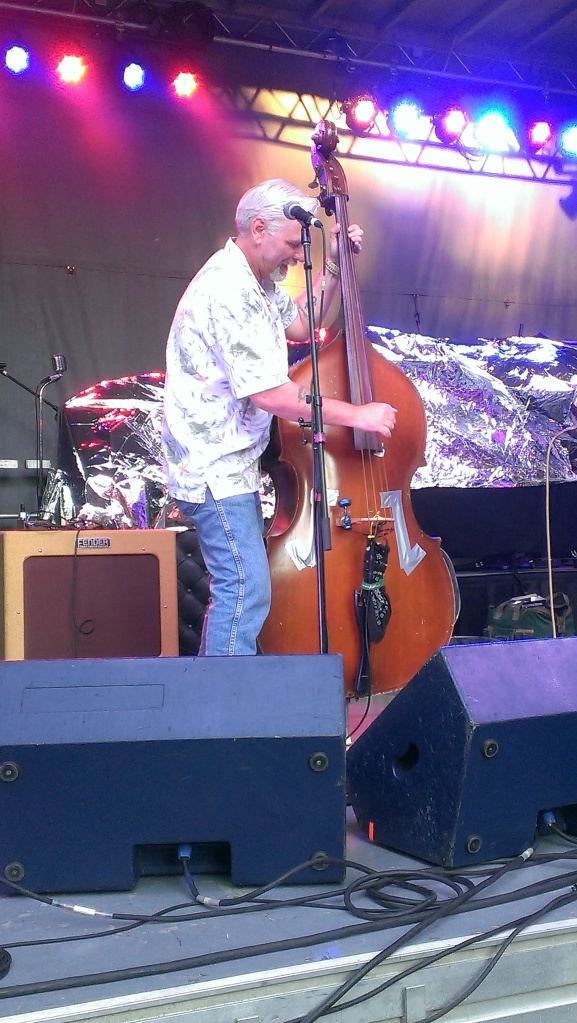 The 2 guys that were soloing while Wayne strummed were great too. Dalton and I were both impressed with the sound of each. The far right guy was a little thick and old style jazzy/honky tonk and the younger guy closer to Wayne was more modern and high-tone. It was a great combination as they played off each other and traded licks while Wayne keep the rhythm going and sang with his twangy voice. People in the crowd were shouting out requests, they were obviously fans and had seen him before. I kept asking myself if I was just digging it because it was live, but, I surprised myself by having to admit I just straight up liked it.

As I write this I am listening to “Wayne Hancock – A Town Blues” and STILL loving it. I think even Dalton liked it and it sure isn’t his style either. 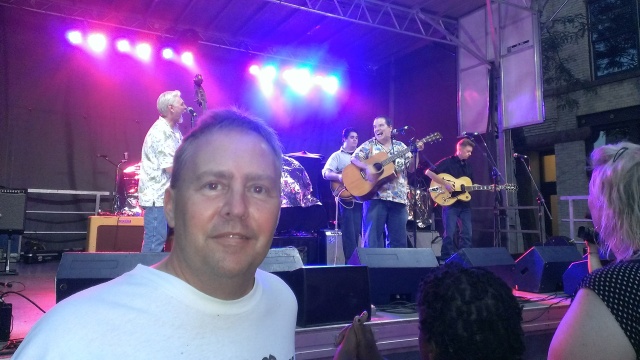 I would see Wayne again for sure.

As it turns out, we did, later during Reverend Horton Heat.

The crowd began to fill in as Wayne and the band packed up and the sun went down and the Capital lit up.

As we waited for The Reverend I thought back on the days when I was listening to the tape that Dalton gave me, and what I pictured in my head that The Reverend would look like. I pictured a young punk style guy all flash and wildness. That was what the music portrayed.

When he came on stage, for a split second I was scared. He looked nothing like I pictured. However, in about 10 seconds I forgot all that. He tore it up!

His fingers were a crazy blur as his opener blistered the air. That’s The Reverend on the right, Chris on the drums and Jimbo on the (yes!) standup bass. I love the slappy sound that it makes and Jimbo was crushing it and looked like he was loving it.

The sound was great and The Reverend was making that guitar make sounds like there were multiple guitars up there. It was amazing. I hadn’t expected him to be so fluent I guess. Stupid I know, but like I said I half expected a crazy kid up there. His hands were the kid and he made us believe it.

In the second song Jimbo put the bass down on the stage and then straddled it. I couldn’t figure out what he was doing, but he started playing it again and then The Reverend stood on it and played! It was so cool! 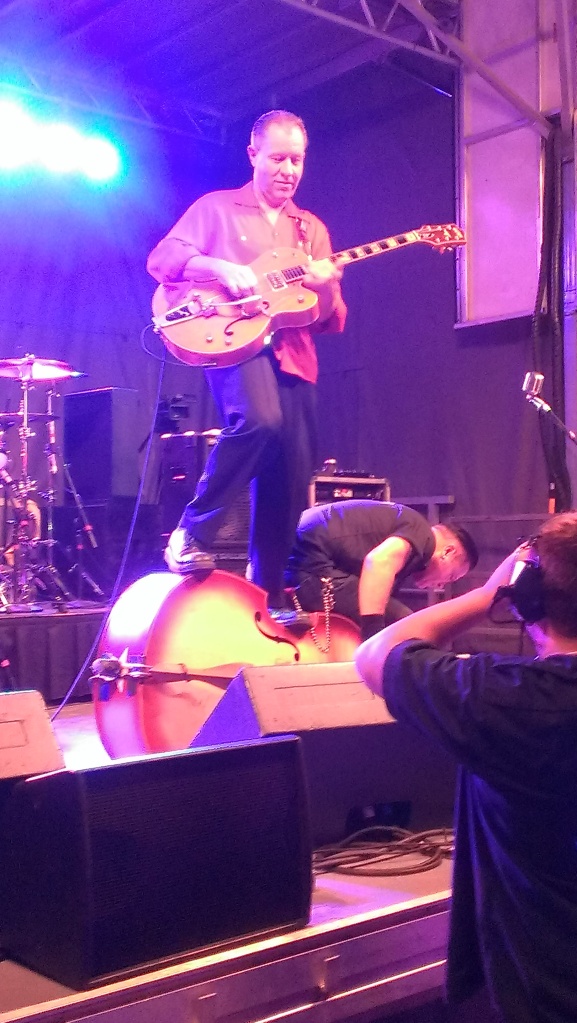 During the show I formed a real respect for folks who take concert pictures for a living. It isn’t easy with all the crazy lighting to get good shots. I took over a hundred shots and only a handful came out really well, the rest are okay for the memories, but will never make the Rolling Stone cover. You can see the whole batch on The Aural Retentive facebook page.

The Reverend burned through a great set with a lot of stuff that I knew. His fingers were flying and caressing and tweaking all kinds of sounds out of his guitar. Dalton and I went hoarse screaming when he played “400 Bucks”.

MMI (Madison Media Institute) was recording the show and they were down front between the stage and our barrier. 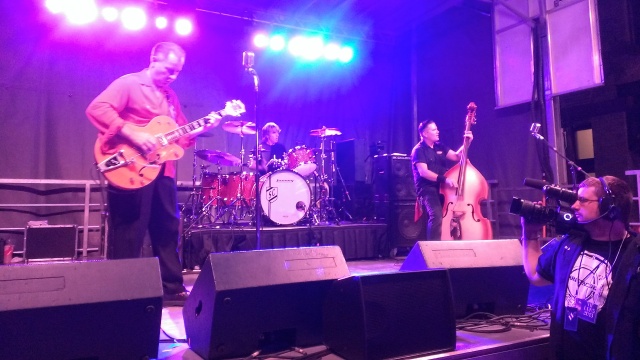 Then after a bit he introduced another guitarist that joined him onstage; Deke Dickerson. 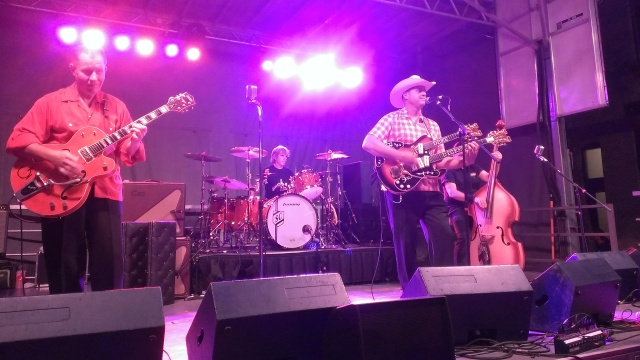 I had seen Deke’s album, with his double neck guitar on the cover at the merch table. He has several albums and a book about guitars that I may have to check out.

They jammed together for a few songs. He was cool. Way honky tonk voice. They had a stool brought out and did some acrobatics with Deke’s guitar. The Reverend sat and played the lower neck while Deke played the top. 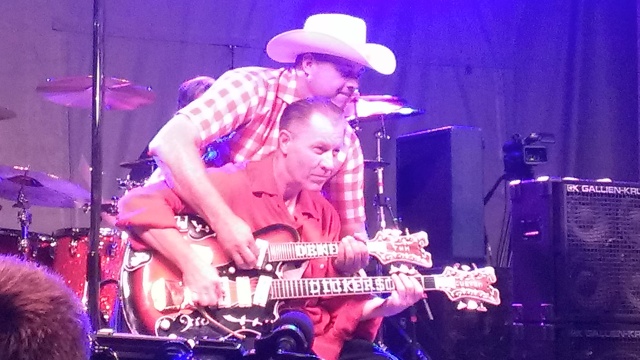 Then Deke took over the stand up bass while Jimbo held a chord and The Reverend strummed.

It was crazy and fun to watch. The song was fast. Then they got back to their own instruments and turned the speed up even faster and traded solos.

It was quite a spectacle. Then Deke did some eephing onstage. Say what?!

Then they slowed it down a bit and brought out Wayne! 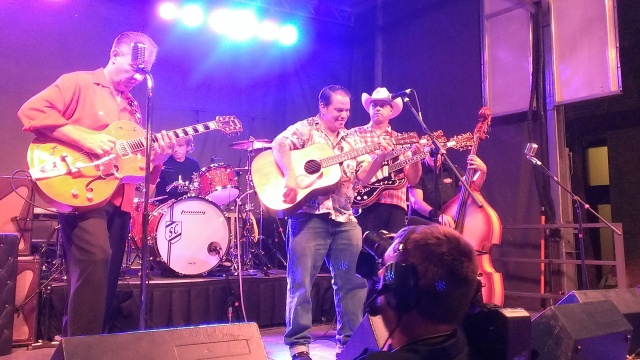 Then it was back to the power trio for a few more songs. I love this back to back picture. 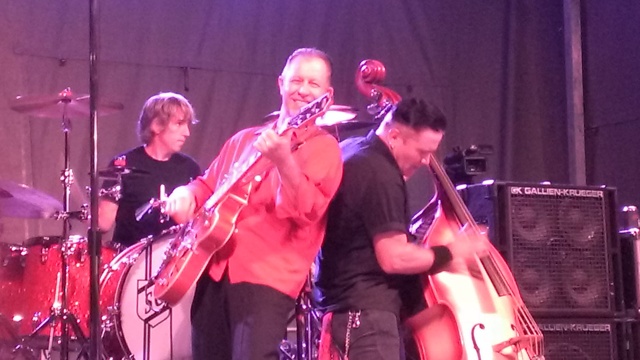 The lighting was just right for good focus, The Reverend is smiling and Jimbo and Chris are a blur of motion. I may have to blow this one up and frame it for the man cave.

Then before you knew it, they left the stage. Boooooo… 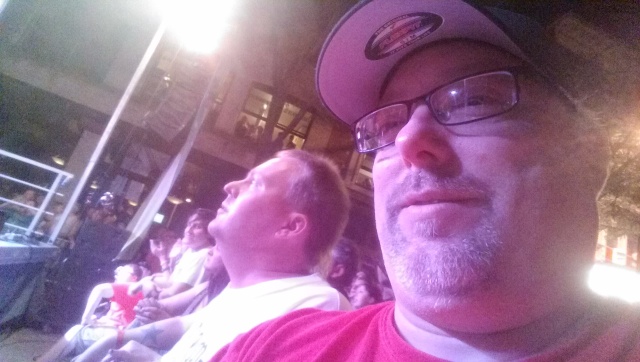 I knew they would be back. Dude, take the sticker off of your new hat. Ugh.

The Reverend and the boys came back for an encore and were even MORE fired up than before! It was intense. They played some more favorites and then Deke came onstage again, this time with a different guitar and they played some more.

It was SO good. I can’t believe this show was free. I loved it.