As I have been writing this blog a few things have come clear to me, mostly about how we all learn about music. I see differences in how I learned about music and formed my opinions about bands and the way Joey my 12-year-old does the same thing.

For me, when I was his age, unfortunately all I had was the radio. I was at the mercy of whatever pop stuff was being played. I vividly remember Paul Anka and Frankie Vali and the Fifth Dimension and others in the same vein played all the time. There was no rock station. No I Heart Radio. No Pandora. You learned everything from the pop airwaves. 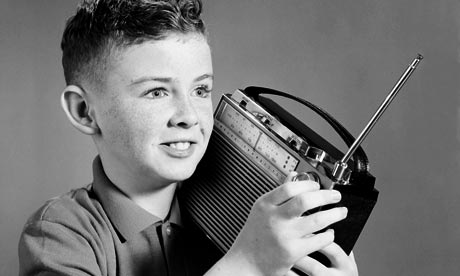 Or if you were lucky enough to be in a home where your folks loved music, from what your parents played.

I was one of the lucky ones, my folks loved music and played records and were into Neil Diamond and Barbara Streisand. It was a good starting point. There was music playing a lot.

Then I discovered 45’s. Grandma, another music lover, bought me a small record player and a case of 45’s from a garage sale and I started really noticing records and investigated the records we had in the console stereo. There was of course Neil and Barbara, but there were other records too, ones that they didn’t play. I played them all and learned more about what I did and didn’t like. It was a very tactile learning process.

We moved to Ann Arbor Michigan and the college radio scene really opened things up for me. Not only was I hearing new stuff, they made a point of calling out what they were playing and I started noting what I liked. There was also a rock radio station in town. Real rock. WABX rocks Detroit! I learned a lot of new bands.

Also during this time, mom bought a stereo, with a record player.

Eventually I started going to the record stores.

This is where it all started to happen for me. While mom was shopping I was digging through the records. I had little or no money, but flipping through the records was all I wanted to do. I learned the covers of albums, read whatever was printed on the outside of many and learned about the names of bands. Remember when they had the plastic name separators between bands? It was again a very tactile process. You were touching everything. Holding albums was key and looking at pictures and getting impressions from it all.

I swapped records for listening and taping with some friends, but it was a real dance of trust to loan albums. There were fragile and big and when you brought it to school for the trade it had to make it back to your locker, and then home, then back, then back to the locker, then back to the owner. It didn’t happen a lot.

Then in college, proximity to an even bigger and wider array of music and records and easier swapping/borrowing exploded my collection. I taped records from tons of people. This was how you discovered new music. Paul loaned me George Thorogood, Anton loaned me Kate Bush, Tom loaned me UB40… and that was how it worked. Sort of the Music Ninja phase.

Then came Napster and everything changed.

Now I’m not saying it is worse or better now, but there are some clear differences that I think about now and wonder about.

For one thing, for Joey, there is not as much music played in the house. That is not to say that I don’t play music as much, but as music is more portable now, I take the music with me. My phone is now my stereo. Since returning to records I have played much more on the stereo, but nothing like in the past.

Max and Abbey were more tuned in to the music when it was playing each night when they went to bed, or when I was cleaning the house. I would jam the music. Music was a more common language then. They each had their media players too. Zunes (Abbey) and I-Pods (Max) were always around.

Joey took over Cindy’s I-Pod Touch last year. I think he has about 25 songs on it.

He has less of a music influence from me than Abbey and Max did because the way I listen to music has changed. I’m a bit saddened by that. So I try to get behind any mention of songs that he likes. He mentioned “Yellow Submarine” a song they were doing for a school performance once and I gave him some Beatles for his I-Pod. Likewise for a while when he was into The Blues Brothers I gave him a folder full of blues songs trying to open that door. So, I’m doing what I can. I keep telling him that one day he will come to me and ask me about Pink Floyd, or The Stones… or something, but in all likelihood, unless he becomes a music junkie like me, what he finds for himself will probably suffice.

These days you don’t have to have someone with a collection of music to give you a taste of a band when you are curious. There are so many ways to hear and sample things without having to hand over money on faith like I did when buying the albums. I rarely buy any album now without pre-listening to it on Grooveshark. Gone are the days of buying an album blind. I tend to believe that was what gave you such a band loyalty back in the day. I usually stayed with a known band when my dollars were at stake than buying something from a band I didn’t know much about.

Now there are Podcasts, I Heart Radio and Pandora. There are blogs that stream music and you can find full albums to listen to on YouTube. These are the tools that Joey has these days. All digital. Joey has never purchased a CD. He’s gotten a couple as gifts, but he has never set foot in a conventional CD section at Walmart, or a record store, or even check them out from the library. It’s weird, right?

Sorry, don’t forget Amazon, which is where I buy music these days, on my phone. My phone is my alarm clock, my e-mail reader and my stereo.

Now I am not saying that the new ways of doing things are all bad. In fact, I’m sure Joey is going to end up with less bad purchases than I did back in the day. You know, the records you think will be great and end up being unplayed after the first time. He only buys a song if he loves it. He buys one song at a time and never has to listen to the non hit songs that fills the rest of the album.

I have been getting into mix sites recently. I have mentioned them here before. These sites let people put together mixes of music, like http://8tracks.com/ and sites that post DJ mixes of certain genres, like http://www.dubsession.com/. I have even dabbled in some video feeds since I found out about it after the “Live On King Street” series where I saw Reverend Horton Heat, like http://www.irocke.com/. If you want to hear some new stuff there are all kinds of ways. You don’t need your friends to recommend things or rely on the radio or just what you have physically at your disposal like I did back in the day. That I think is both good and bad. Joey may get the music he wants, but it is lacking all the info that came with albums and CD covers and tape j-cards. Sigh… that was the part I loved.

These days Dalton and I get together and swap files. Often we are going back in time, Stooges, Yes, Bob Dylan, or swapping live stuff. I have also started a file swap with Otis, and am learning about a host of new bands through that exchange.

At any rate, Joey has a lot of tools at his disposal. I’m sure there will be even more music ninja possibilities in his future. Of course, maybe he won’t be as into music as me, and that’s okay. I just wonder how things will be when and if he gets the hard-core bug. What will the landscape be like? Will bands even release albums anymore? Will internet releases crush CD’s soon? There are a lot of bands experimenting with it.

The technology changes all the time.

I am waiting for my body internalized media player that will replace all else. Of course I’ll need a backpack for my old school external hard drives. Probably some good brain Wi-Fi too.