We stopped at the Waunakee Public Library recently and I bought 2 CD’s from the perpetual book sale they have going on there. Space is limited and books and CD’s and DVD’s that outlive their usefulness or that they have too many copies of or whatever end up on shelves by the door and are cheap. This night CD’s and DVD’s were 3 for a buck.

I had to look.

I found 2 CD’s that I took home. Turns out it was a good night to stop in.

The first CD I found was 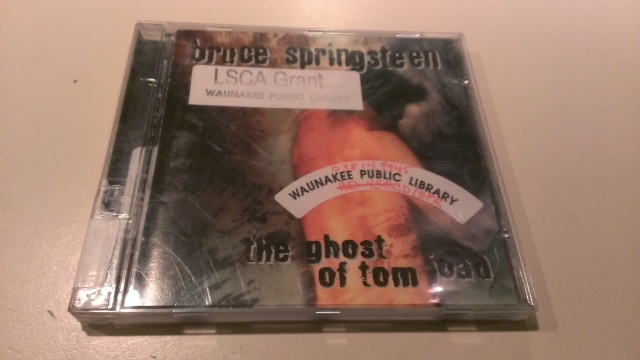 I have written about this CD before. In fact, this very CD. This is the CD that really brought me around to Bruce. I checked it out on a whim and was blown away with the songs. I vividly remember playing this and the new Smashing Pumpkins CD at the time “Melancholy And The Infinite Sadness” back to back while in my upstairs room at the townhouse by the creek in Waunakee. This was the first time I really had heard anything but the up tempo E-Street band songs on the radio and I was hugely impressed. I was also familiar with the song “The Ghost Of Tom Joad” from the Rage Against The Machine cover of it on their “Renegades” album. The Springsteen cover art with the weird smushy body image really fit with the songs and the whole thing just worked. This was the actual physical CD that turned me, I had to get it, had to rescue it. I would be sad if it ended up getting tossed. I have the files of course, but this is the ACTUAL CD… am I crazy? I wonder how many people checked this out over the years it was at the library?

The other CD was a real surprise.

First of all, you have to understand that I have a very large collection of Tori Amos bootlegs and spent a really alarming portion of my life finding and downloading these boots, most from a website that I found on accident one night that had literally hundreds. I only stopped when I ran out of space and had to start burning them all off to CD’s as backup and realized how much I had that I decided to take a break. I could always go back and get more I reasoned. I should probably stop for a while. That website disappeared eventually, so what I have is it, and all I will likely EVER need.

Out of curiosity I just counted and I have over 145 Tori bootlegs. I am mildly ashamed. Plus I discovered something funny. More later.

I have even bought some Tori lately. I bought “Night Of Hunters” from Amazon a while back. Not my favorite by any means, but I’m still a fan.

I would think that I would have at least heard of it. So it was a good find and at 3 for a buck how could I not buy it.

Once I got home I consulted my favorite website for album info:  http://www.allmusic.com

As I looked at it closer I discovered that it didn’t have a barcode and it was “Made in Czech Republic”. Snow Records? 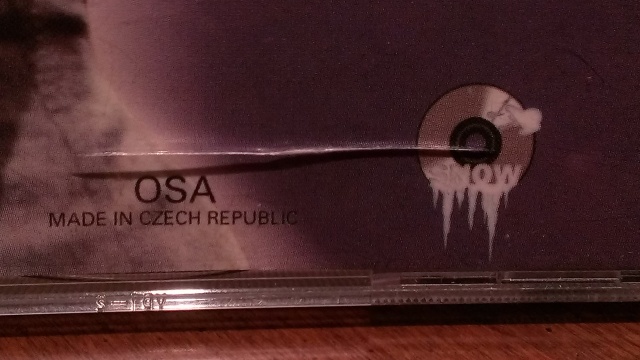 I found a listing of it at Discogs  http://www.discogs.com/Tori-Amos-Sellout/release/4536949 that confirmed that this was an import. In my day we called imports BOOTLEGS. So I had stumbled on and bought for like 30 cents a double CD Tori Amos bootleg from the Waunakee Public Library. Awesome buy!

My first question was how the heck did the WPL get a bootleg in their collection? I have actually seen the process by which the library chooses and orders materials for the library. I doubt that they had a recommendation for this from normal sources. I think this must have been a donation since there is not a WPL sticker on it like the Bruce CD. That had to be it. Who gave up a Tori bootleg to be sold for 3 for a buck night?

There is a track showing in Windows Media Player that isn’t listed on the sleeve.

In most cases you would probably consider this a bonus or hidden track, but when your CD comes from the Czech Republic you have to wonder (no offense to the Czech Republic) if this is in fact a mistake. “Not The Red Baron” is listed as the last track on Disc One, but there is a Track 12 listed after that when you play it in Windows Media Player. The CD itself is a bit scratched has a few skips and sonic narfs and needs to be buffed, which I could get done at Family Video for a couple bucks, but, and here is the funny part that I said I would get to later… I already have this!

I have the files, crisp and clean. While I was counting my Tori bootlegs I noticed this title in the list. Maybe I can buff it and sell it.

Clearly I am not quite as sentimental about this one as the Bruce CD.