It was a freezing cold night in Madison and I stood outside in just my hoodie (parked in the ramp just behind The Majestic and left my coat in the car so as not to deal with it) to get this shot then ducked into Madison’s to wait for Otis and Amy. They arrived and we had some drinks and then headed over after the doors were open. No waiting outside for this show.

We were able to secure a table on the second riser (no chairs anywhere) to lean at. If you don’t mind standing and don’t want to be in the press of the floor crowd, these are great spots.

I have never seen so many men in beards in one place in all of my life.

I got our “we were here” shot. Sorry, not focused very well. Note, Otis is sporting his Japandroids t-shirt. Nice.

I made an immediate sweep of the place for a show poster, but to my great sadness, there were none. Not that they were already gone… there just weren’t any. Weird.

My camera phone doesn’t do fantastic in the low light at The Majestic, but I did get some pretty good shots at this show, due to light show effects. Your own photos from a show are always precious, however, if you want to check out some really really good photos from the night, find them here:

You can see us in one of her shots.

Start down front and find the girl who is looking at you. Then over her shoulder to the left is the guy with black t-shirt and gray beard and black glasses. Then over his shoulder to the left is a guy with glasses, brown beard and ski hat. Then way behind him is another bearded buy with a hat. You can see me and my gray hair above first hat guy and to the right of second hat guy. That was fun huh? Otis is to the right of me directly under the light orb. Amy on his right, probably, though it’s hard to pick out any distinguishing features.

Maybe one day I will get brave and take my Cannon to a show. Get great pictures. Until then you will get shots like these…

The first band up was Golden Animals.

I thought they were really good. The sound was good and they were a good start to the night. Psychedelic. The drummer was very fun to watch. She had very elaborate movements and style the way she was keeping the slow, but hypnotic beat. She used drumsticks with the round pads on the end, like kettle drum sticks. Made an interesting subdued sound with a heavy thump. The keyboard player was making the keys sound psychedelic and the guitarist was good. They played mainly medium tempo stuff and everyone was digging it. I believe they said they were from New York. 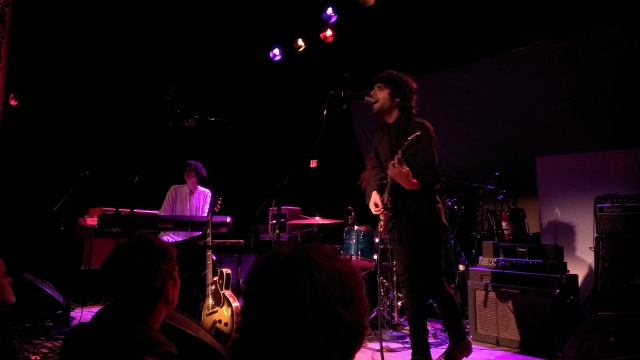 I got down front stage right (left?) and got a another shot. Then switched sides.

I liked their set a lot.

Then came Roky Ericson. Now there was a lot of buzz about Roky and several comments on The Majestic Facebook page about how stoked people were about him.

I would never besmirch the efforts of a musician playing live, I have too much respect for anyone who is willing to get up in front of an audience and perform. However, that being said, there was something off about Roky that night. He came out to thunderous applause and Roky came front and center and someone helped him get his guitar over his shoulder. He is a big man, but looked timid at the microphone. He looked quite a lot like he was thinking hard about when to sing the lyrics. It was odd.

The band was raging and it was LOUD. Too loud. Made me worry about The Black Angels set. Roky played  3 or 4 songs, continuously looking over to the young man playing lead guitar to his left. That guy was shredding it. Roky was actually playing very little. After a while he didn’t really play at all. He would put his hands on the strings once in a while, but was not really playing leads.

He did sing though, with a growly voice and that part of his show was great. He was either singing or facing the lead guitarist and letting his arms hang while watching the young guy jam, but with his back to half of the crowd. It was strange. It didn’t really fit with the psychedelic theme of the night either. This was straight ahead rock. Not bad, just seemed out of synch all over.

At the end of Roky’s set, a guy came out and took the guitar off of him and physically took him by the shoulders and turned him to face the crowd, as if Roky forgot to acknowledge us. He exited the stage and I was left feeling a bit sad.

Check out Roky’s story. It’s an interesting one.

Then came the light show. I have been to The Majestic several times now and aside from some videos playing during Man Mantis and DJ Shadows sets, there have been no lasers or blimps go-go dancers, etc. This night however, moments before The Black Angels came onstage a light show began. Simple, but effective.

The stage was covered in greenish-blue blobs that were coming out towards us. COOL !

Then The Black Angels hit the stage and the music started. I was worried during Roky’s set for nothing, because the sound was right on. I know very very few actual song titles of Black Angels songs, but I knew the first few by sound and we were all jamming. It was awesome. Due to the light show and effects I was able to get some good non blurry photos.

They were exactly what I had hoped they would be after listening to them for the past year, thanks to Otis who first turned me on to them. The eerie, psychedelic sound, complete with echos and reverb and hoots and tempo changing keyboards was amazing.

The female drummer was killing it. All the band was. I was all smiles and caught myself swaying with my eyes closed several times. If I had started waving my arms slowly above my head it could have been a scene from the 60’s for sure. 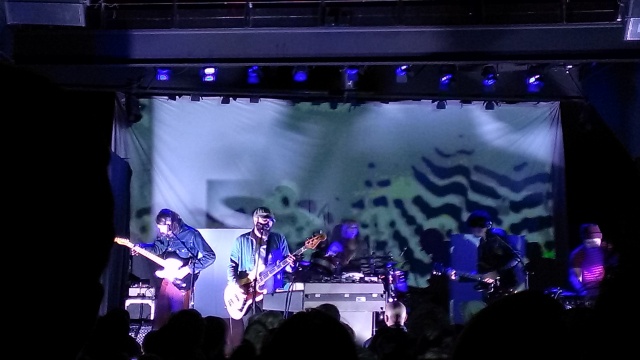 They did the strobes a few times and I was able to get good shots with the bright lights. 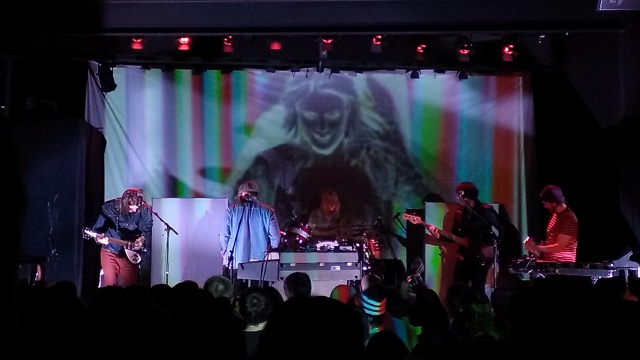 At one point there was a reversed image of a dancer behind them and it was eerie and sexy all at the  same time. Alex, the lead singer talked a few times between songs, announcing they were from Texas and that it was COLD here in Madison, and was very soft-spoken and nice. I like it when bands do a little talking and sound genuine.

The show was fantastic, hands down. I would see these guys again any day.

I bought their “Directions To See A Ghost” vinyl album at the merch table and guarded it all night. I had no intention of waiting around for autographs, didn’t even bring my sharpie, but I didn’t really own any Black Angels. Seemed appropriate to buy something at their show. 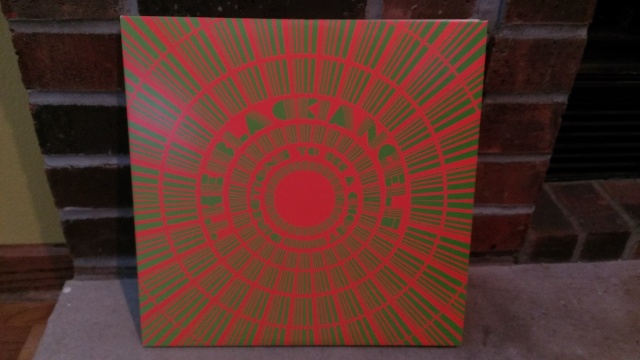 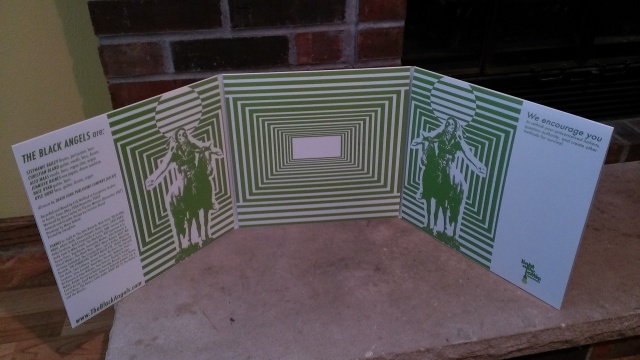 I’m listening to it as I write this on a Saturday morning. Having seen them, now I can picture them onstage playing this stuff. Looks good on the record player too.

The show was great and the band is great and I am so glad I went to the show. It was a great night.

I was fully recovered by Thursday.

Check this band out if they come to your town.

You will not be sorry you did.