U2 releases its new album for free today exclusively on iTunes | The Verge.

Yeah, a jillion of you probably went and downloaded this.

I have a sort of love hate relationship with U2. I started with them in the “Sunday Bloody Sunday” days and then they lost me with “Zooropa”. Then I was back with “Vertigo” but then it’s been hit or miss since. Likely the convergence of the both of us getting older. Sometimes I am just not ready for music demographically aimed at me. Then they had the weird rooftop release of the song on Jimmy Fallon’s Tonight Show. It was too contrived for me. The song could have been fantastic, but the whole scripted spontaneousness was awful.

So, when U2 released this new album on I-Tunes, announcing it as they did at an Apple event it just reeked to me of self-promotion and slickness and I instantly disliked it. Yes, without even hearing it. I mean seriously “Songs Of Innocence”? Ick. 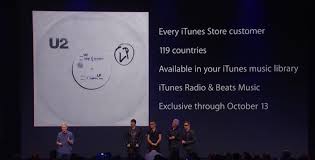 I have to say though that I was curious, and yes, I downloaded it. I tell myself I was just on I-Tunes (a rare event) to download some of my Dubzone podcasts, but there it was and I downloaded it. It was free and my God-given right to own it. I loaded it onto my phone and went to work.

I had 30 minutes between some meetings and I fired it up.

After 2 songs I was hanging my head. I liked it. Despite the title, despite the selfless promotion, despite the awful cover even… 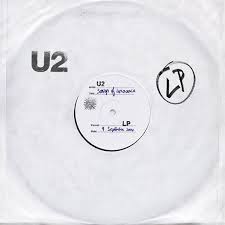 I have no explanation but to say the songs are good. There are some great catchy hooks from The Edge and Bono is soothing and powerful. Damn it!

If you have I-Tunes… go get it while you can. It is worth every cent you won’t have to pay.

Perhaps even despite yourself.