I like The Beatles in all of their waves of styles, but my least favorite if you will is their very early stuff. It’s good… all the “yeah yeah ooohhh” stuff in the very beginning, but I prefer the more polished later stuff. So starting at the end of their history and working backwards made sense to me.

So, to that end, I got a list of their US studio album releases (my target) and interweaving my fingers and cracking my knuckles almost in super-villan style, I went to ebay and started hunting again.

I owned this one back in the day. This was The Beatles I knew visually. I had gone with Jeff to see the film at U of M and I knew about the rooftop concert and this album was solid. No studio gadgetry and orchestration to fill it all out. Just 4 guys playing some music. I listened to this in my teenage bedroom over and over and the movie helped solidify it in my consciousness.

Got it on Apple.

I did realize as I was searching and looking at other releases that I had a decision to make. Not all studio releases were released on Apple, and when they were released on something else, like Parlaphone, or Capitol, and THEN released on Apple, which would I choose? I mean the purist would pick the original, probably a first pressing too. However, I really like Apple. So I decided that I would choose Apple over anything else if possible or not cost prohibitive.

Well, I am buying them to listen to occasionally, not store in a vault, so I figured get the ones that you like best, on the label you like best. Unless the Capitol version is significantly cheaper, get the Apple version. Also… no reissues.

One thing that I found very interesting when my “Let It Be” arrived was the inner left picture of the studio.

What a mess. Can’t say I have ever been in a real honest to goodness recording studio, but I don’t imagine them to be this cluttered and messy.

Yeah yeah okay the movie was being filmed at the same time and there is camera equipment all over the place too, but damn. That had to have been so weird.

The next target was Yellow Sub.

This one I had also owned back in the day. Back then I recall being disappointed with it only in the fact that who wants to listen to the George Martin orchestra stuff?! Certainly not me, but the rest of the album is fantastic. “Yellow Submarine” and “Hey Bulldog” are great. “All You Need Is Love”? Indispensable. So I knew going in that I was really buying half an album, but what can you do? 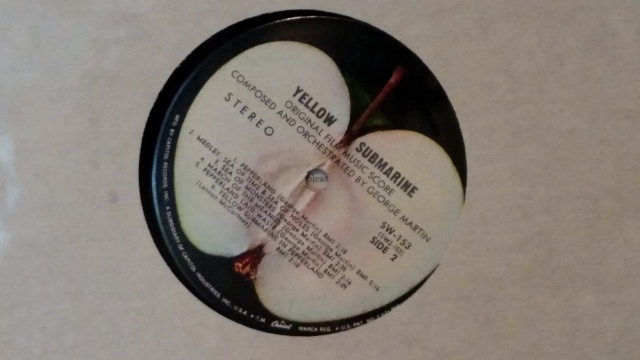 Got it on Apple.

At this point I owned all the albums that I had once owned. To recap:

Let It Be – newly acquired

Sgt. Pepper – have the new (still wrapped) recent reissue – may get an original later

Up next are the album I have never owned…