I have heard every Beatle album, but there is a contingent that I have never owned on vinyl. Those were my next white whales.

I have been horribly remiss in documenting the albums I have picked up here and there this past year, but in regards to Beatles… I did get from Strictly Discs an album that I was after in my Beatle acquisition list: Revolver! 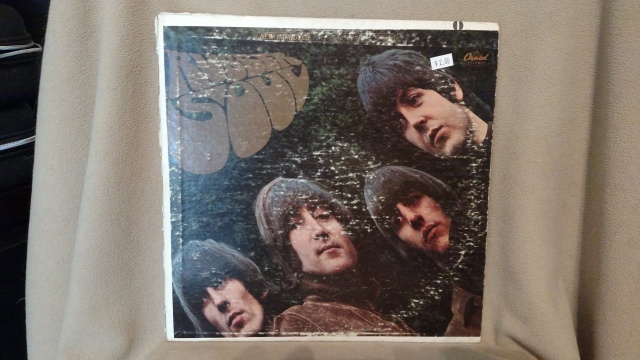 For 2 dollars!! However, it’s in about as good of shape as you would expect for 2 dollars. It’s worn down and scratchy and made me cringe to listen to it, but, I think with a bit of restoration, it might make an excellent cover clock. That is where I create a clock out of the cover of an album, not the record itself.

Incidentally I also picked up a copy of Sgt. Pepper that day too.

also 2 bucks. Also in the same sort of shape. You have to love this cover though. One of the best of all time if you ask me. I’m thinking a tiny clock right in the bass drum circle would be magnificent.

I have a reissue from Dalton’s collection.

It was fun looking at the cover and remembering all the crazy stuff about the cover shot.

Never paid much attention? Check these out.

Anyway, I did find an auction that had both “Revolver” and “Rubber Soul” together on Capitol. What a great way to go! What a pair.

These were the first albums that I had gotten that I had never owned on vinyl. A whole new era for me. I had had dub copies on cassette of course, but now I owned them.

“Revolver” for me falls under the category of second worst cover of a Beatle album.

The worst? My next acquisition.

“The Beatles – Yesterday And Today” 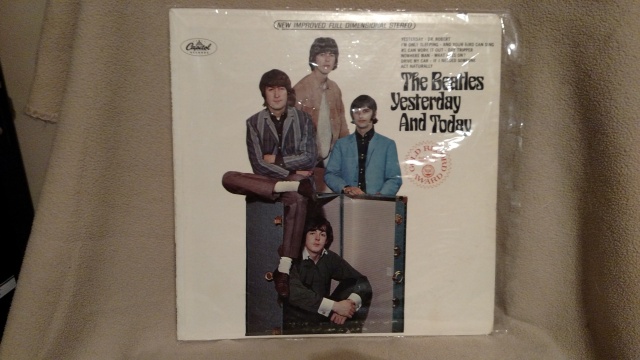 I realize that Photoshop was years away and some poor bastard did this by hand but yikes. The clothes, the pose, the stark background… this is ugly. The music is great, don’t get me wrong, but this one is never going to be hanging in a frame in the man cave.

The next one has a distinct impression for me too. At first I didn’t like it.

“The Beatles – Something New”

I have the clear recollection of hearing this at Jeff’s place and not liking it. I have no idea why, since this is great stuff, but I recall having that reaction. All I can figure is that I was fresh off of older Beatles and this was a step back in time with the sound and material. Closer to the yeah yeah yeah phase.

Another never had it acquisition was this soundtrack.

This is a great album. It sort of walks the line of early Beatles vs hints of Beatles to come. I’m pretty sure I have seen this movie, but can’t remember much of it.

Time for a Beatle movie marathon.

Wonder if they are on Netflix?!