I came, I saw and I conquered on the Ticket Master website and got my tickets to The Smashing Pumpkins show at The Sylvee this November…

Yes. I did, but… I will have no ticket stub!

I have been keeping my stubs to shows since 2012 in my Ticket Album. 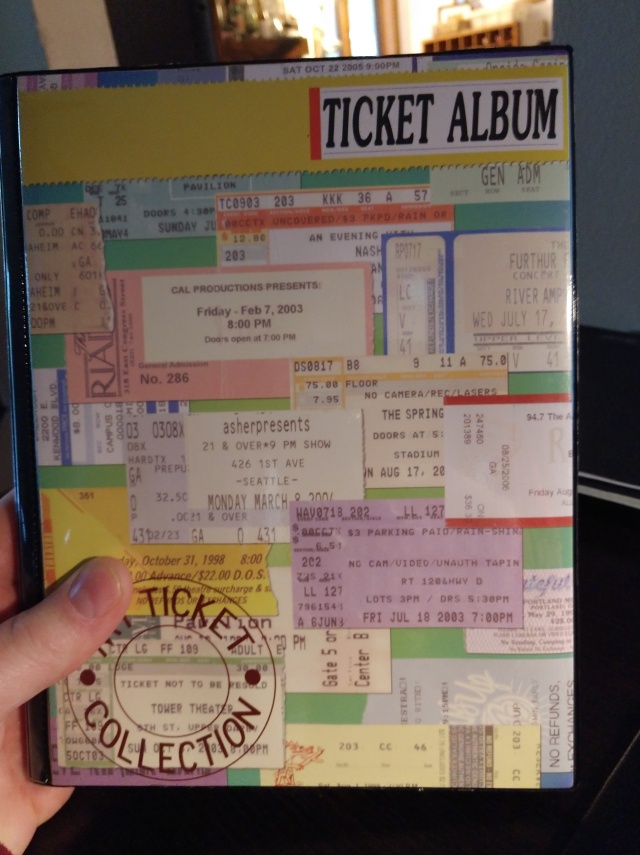 There are some very early shows in here. Starting with Bowie in Milwaukee 1987 and then local stuff… The Feelies & Firehose in 91 at the Barrymore and L7 in 94 at The Stock Pavillion. 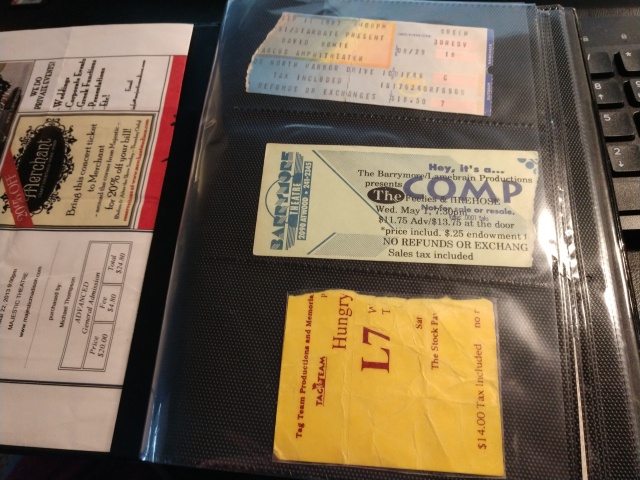 I have 2 Buddy Guy stubs from the now gone R & R Station that Dalton saved for me.

Missing are the Nine Inch Nails stubs I had.

Nonetheless, I started in earnest in 2012 with a show that Dalton and I went to. Henry Rollins at The Barrymore. This was really the first show that I had gone to in a long while and I knew before we went that I was going to keep my stub. Sigh. I probably already wrote about this in the post about the show, but look what they did to my ticket! 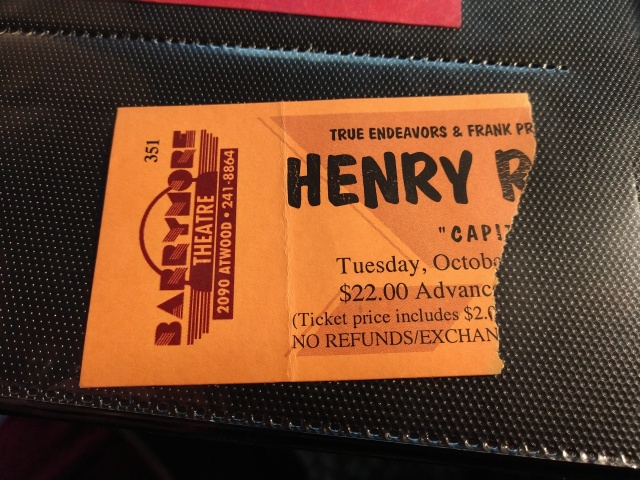 Regardless, I have kept every stub since then. It’s not a huge collection, but it’s mine.

It was in 2013 that I had my first (almost) non-stub show. The English Beat were playing and I bought tickets online and to my horror, the only option was print at home. Ugha. 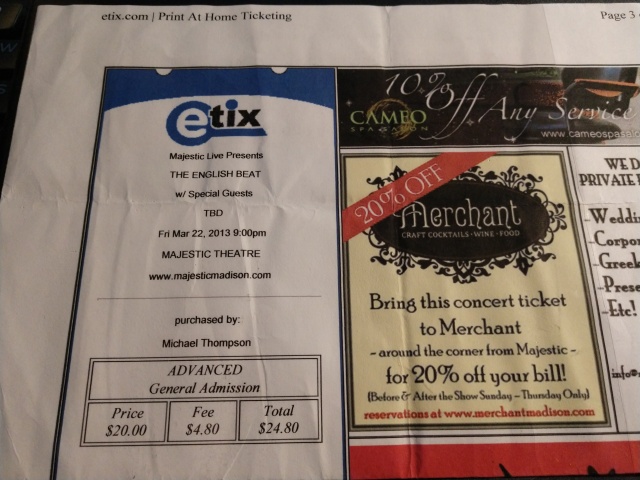 As it so happens, I found a stub lying on the floor at the show and it made it to the ticket binder. That was a close call. 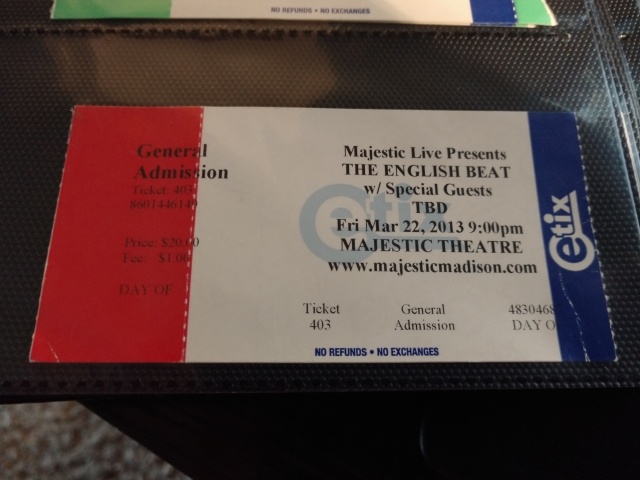 I won tickets to see Dick Dale from Mad City Music in 2015 and my name was at the door. No ticket stub. This was the first. 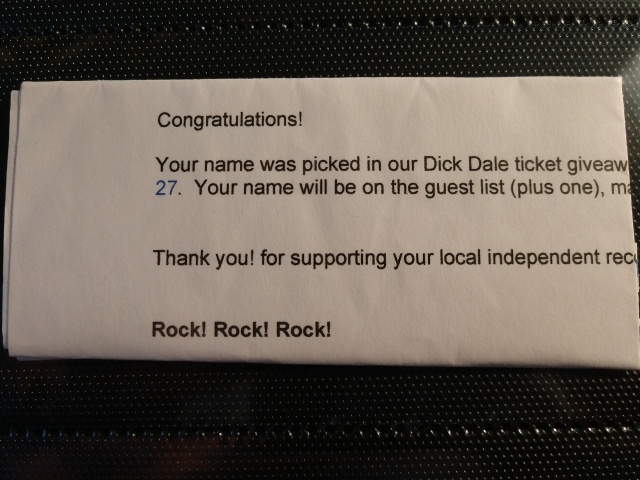 Hell, I hate it when I don’t get a show poster, but not having a ticket stub is sad.

Then it happened again when I went to see Earth. Print at home. Sigh.

Most recently it was for METZ at the Majestic. Print at home.

As an example of how important these are to me, I panicked when I saw this in my book. 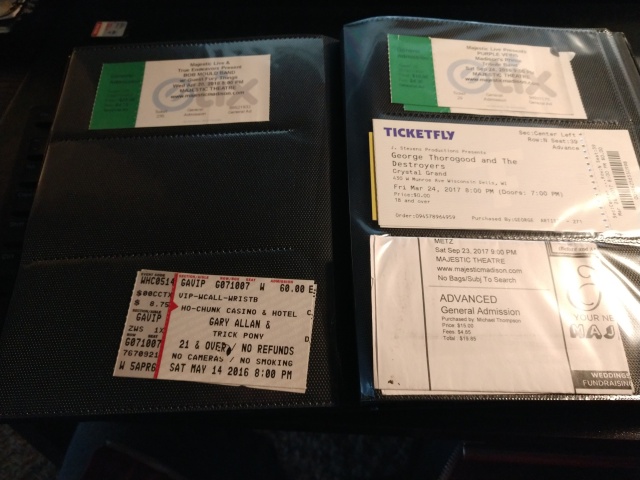 Uh… what the hell?! WHERE IS MY BUCKETHEAD 2016??!! I flipped. For a moment, I broke out in a flop sweat and I could feel my heart racing as I tried to retrace my steps since I DID remember suddenly taking it out. As it turns out I had taken it out of the binder to show in a video and hadn’t put it back in its slot. It was in-between the next pages. Whew. Everybody just settle down.

THIS is however a new level of sadness for me. Everything in perspective I suppose, and the modern age is upon us and all that… but I will not have a ticket stub for The Smashing Pumpkins show. The tickets are on my phone.

I rarely use emoticons, but this one seems appropriate here.

Yes, this is my first time where my technology gets me into the show and not a tiny piece of paper. It even teases me mentioning that these other methods might be available in other circumstances. 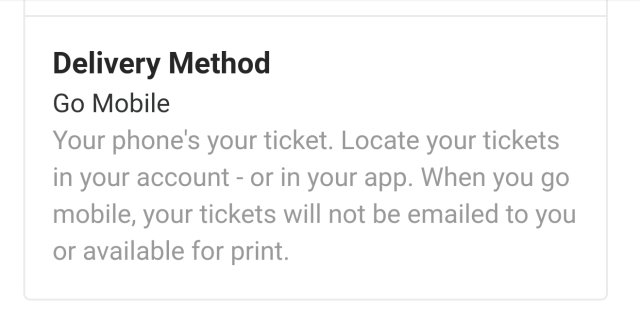 Well, it is what it is. I am not going to not go because I can’t get a stub.

I suppose when the show is over I can post a screenshot from my phone of my bar codes and print that for my book.

Sad and lame, but such is the future, where paper is dead and vinyl is too.