I had 2 boxes to open over the past week. My “Melancholy And The Infinite Sadness” album I ordered… and the $50 Curated Random Box from Strictly Discs.

I myself was mystified by Vinyl Community YouTube unboxing videos. Even made a few of my own. It was like WATCHING a treasure hunt. It’s less edge of your seat blog style, but I wanted to share.

“The Smashing Pumpkins – Melancholy And The Infinite Sadness”

This box sat on the decontamination table the requisite 48 hours, after which point we went out and I made an ordeal of opening it, complete with a photo crew. It’s what I do. 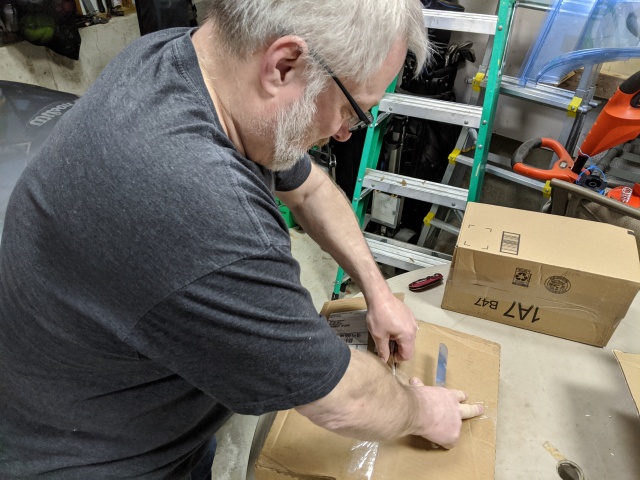 It was packed well and much larger than I had expected. 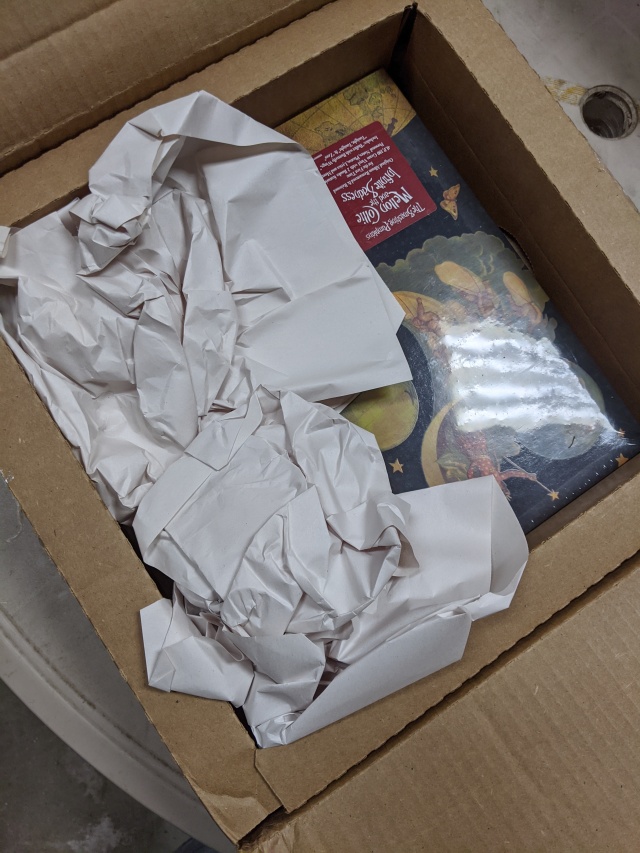 I had my gel handy of course. 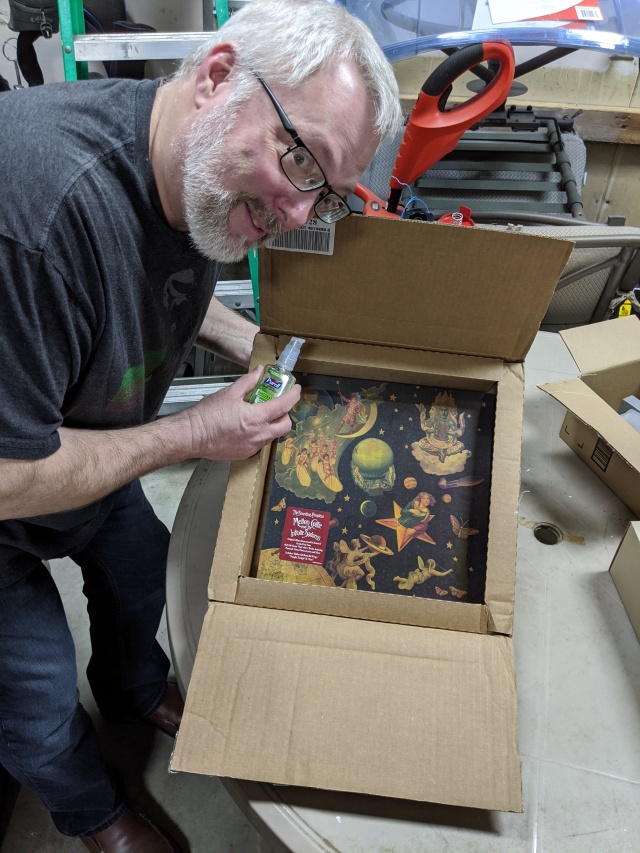 I was actually stunned at how formidable it was when I got it out of the box.

Proud new owner of “The Smashing Pumpkins – Melancholy And The Infinite Sadness”. Thanks Cindy for being my photo journalist. Try no to look at the hair that is approaching unicorn status.

Once I got it inside, when the moment presented itself I… gulp… opened it. However, if you know me, you know that I sometimes like to keep the Hype sticker if I’m able, so I used a utility knife to cut a flap out of the opening end of the box. That way the outer plastic film can stay on, but I can get the contents out. I thought it was brilliant.

Inside the outer box was a lyrics book, a book that contained drawing demos of the eventual art and stories about the songs and tons of pictures. There are 4 vinyl records and the blue sheet that you see was samwhiched between the plastic outer wrap and the box itself, presumably since there is no list of tracks on the packaging box. 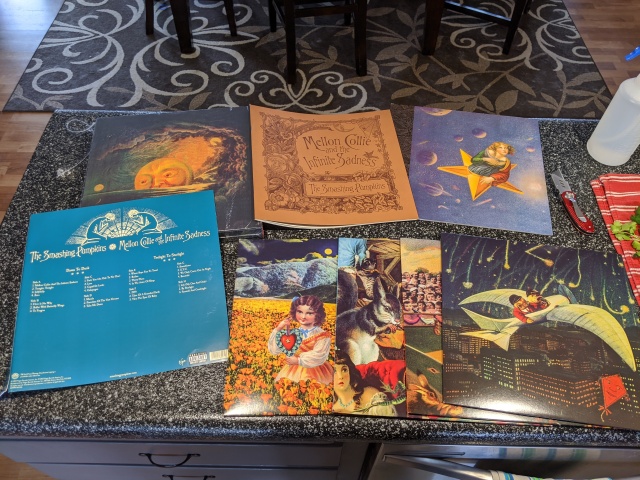 Each record has what amounts to its own record jacket, plus a inner sleeve, and the vinyl in a sleeve of its own. A different color for each. 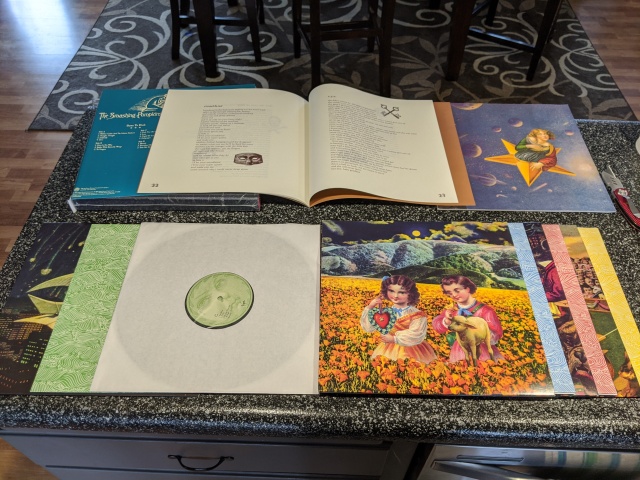 This is an awesome package. An awesome box set for an incredible album. Can you pick it out on the shelf with my other Pumpkins albums?

I’m glad I finally bought it. It will be saved for special moments and played in an atmosphere smacking slightly of a near religious experience.

This box, delivered to our doorstep, and with a peek through one of the handle holes revealing that “Jethro Tull – Stand Up”

sat the requisite number of days in the garage then I brought it in and started in on it. It was very much like a treasure hunt. I knew there would be stuff in here that I likely would have not much interest in, but I was surprised at how excited I was to find out.

True to “as advertised” there were all kinds of genres in here. Rock, Bluegrass, Classical, Jazz… and though there was some I was not interested in, there were some that I was wowed by. Here I display the cream of the carton if you will.

Rare Earth – Get Ready, The Who – It’s Hard (which I had almost bought a few times in the past couple years “Cry If You Want” is a favorite track), The Beatles – Second Album, Billy Joel – 52 Street (one of the 2 absolute essential must have Billy Joel albums), of course the Jethro Tull – Stand Up and a jazz album that I didn’t know anything about but was definitely curious about.

And that was the beauty of the box. There was stuff I was curious about and would never have picked up any other way.

The jazz album I show above is “Toshiko Akiyoshi – Lew Tabackin Big band Farewell Mingus”. It’s something I probably never would have looked at in a records store. “Big Band” is something I typically want no part of… but… 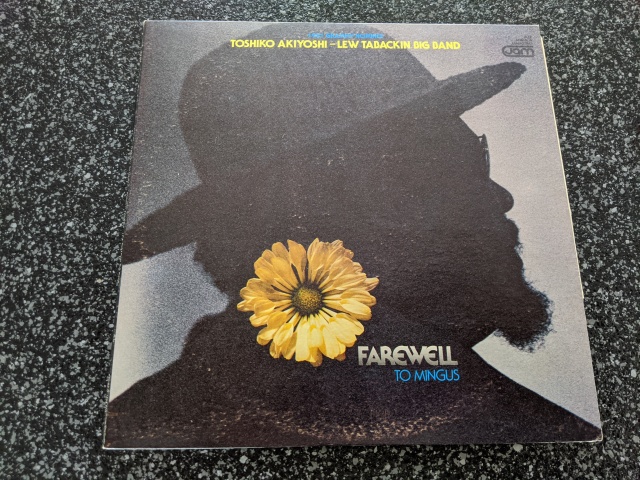 turns out Toshiko is a famous Japanese pianist. This album is a delight. There is a wide range of tempos and solos throughout and the piano is of course great. After listening to this I would say that if I cam across any other Toshiko Akiyoshi albums I would have to check them out. I really dug it.

This is exactly what the box intended. Well played Strictly Discs.

I also got this in my box. Gato Barbieri & Don Cherry.

Now I have heard of Don Cherry, but I had never heard of Gato. I checked him out today and that sax is hot. I can’t wait for the right moment to spin this. Intrigued.

There were a few compilations in the box as well that are loaded with great songs. Also in the box was an album that I had recently gotten rid of since there were some brutal scratches on it. A better copy found its way back to me. “No Nukes”.

The movement didn’t really succeed, but the album is good. I may write about this some day.

Also in the box was “Rare Earth – Get Ready”. 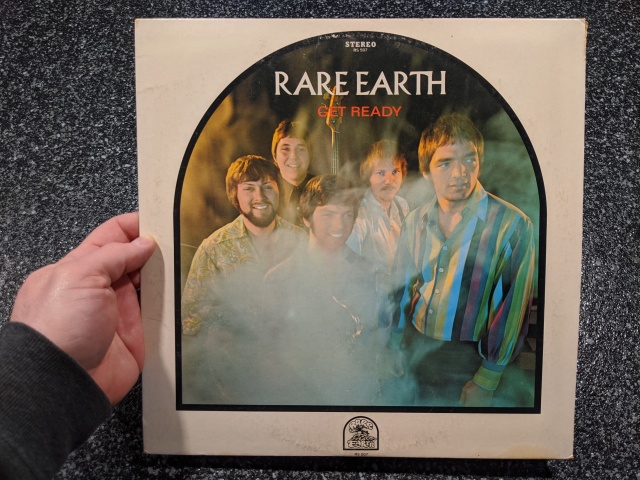 I remember when I discovered Rare Earth for the first time. I heard a version of “Tobacco Road” that was like 20 minutes long. I had it on a tape for a long time. This one has a short version, but it has a 21 minute “Get Ready”.

Another album in the box that I will be checking out was “Jim Croce – I Got A Name”.

This is not the Greatest Hits album that my dad had, but the voice of Jim Croce always reminds me of him. It was a treat to watch him sing “Bad Bad Leroy Brown” and do his little dad dance in the living room.

The Strictly Discs $50 Curated Random Box was a hit.

It was quite a pile. Well worth the wait and I’m glad I picked one up. They are doing more boxes, so it’s not too late to get one of your own. Plus, you get stickers. 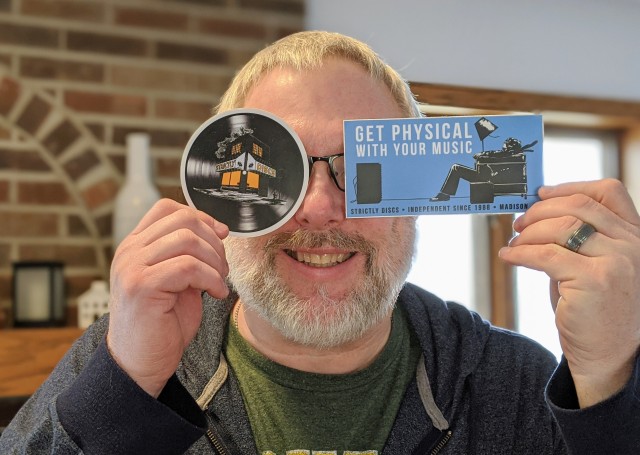